How The Limbless Waterman Does A 5K Swim

One of the most anticipated speakers at the 2012 Global Open Water Swimming Conference is Craig Dietz of Harrisburg, Pennsylvania. Dietz was born without arms or legs, yet he is able to swim, drive, cook, send emails and nearly everything else others can do.

“I will not run a marathon,” says Dietz with a humility and a reality that is inspirational beyond words. “But I can swim and do other things in water. My goal in life is to not let the challenges that I face in my life define me who I am as a person.”

How does he do it? How would you swim without arms and legs, hands and feet? What is unimaginable to Olympic swimmers is second-nature to Dietz.

The first impression that exudes from Dietz’s every pore is how confident and capable he is. While others get a bit of help putting on Vaseline or lanolin before the race, Dietz receives help to put on his goggles and swim cap. And like others standing on the shoreline waiting for the race to begin, he kills time joking with swimmers and friends, small talking with the best of the most excitable chatterers.

As the race gets closer, he climbs out of his wheelchair and hobbles across the beach to the water’s edge, where he gets a little assistance taping his swim fin to his right leg stub. He listens to the final race instructions. He is focused and attentive, straining like the others to eyeball all the turn buoys on the course. As the race officials get into position, smiles, nods and winks are aimed his way in abundance. But his seriousness is clear as he confirms with others the best line to take and most optimal direction to head. But observers are overwhelmed just how different and difficult his challenge is as he stands at the ready on the shoreline.

While others swing their arms and stretch their legs, Dietz rotates his neck and twists his torso to warm up.

If his goggles are not on just right or his swim cap is askew, he just has to deal with it as he has had to do with everything else in his life. 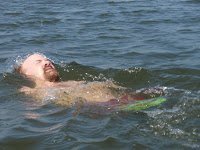 With minutes to the start, Dietz hops right up to the starting line, mixing it up with the other swimmers.

He knows his abilities and moves with confidence among the crowd of much taller swimmers. And similar to the other swimmers, many who are visibly nervous and others who are intense competitive A-types, he listens to the final countdown and waits for the starting horn.

He glares out at the first buoy, mentally going over his race plan.

The start horn goes off and the pack rushes – runs – in the water. As does Dietz. He isn’t running, but he does rush in, intensely just as the next athletes next to him. He is at a clear disadvantage, but nothing is stopping him. Boom! He splashes in the water head first and immediately rolls over on his back as he rises to the surface. Then like a finely tuned machine, Dietz begins to swim. Without limbs, his only mode of propulsion is to move forward by undulating like a dolphin, getting every ounce of energy that he can from his 12-inch leg stub and swim fin.

It’s not freestyle. It’s not backstroke. It is the ultimate in core work. Coordinated and surprisingly quick, Dietz keeps moving his lower half up and down, and up and down, while trying to keep his head and shoulders as still as possible and his mouth above the water’s surface.

He occasionally rolls his head to the left or right to confirm he is on course. He also has a modified breaststroke that he uses sparingly to sight obstacles and buoys, but he makes his way along the course as others do. He just navigates a bit differently.

But as he says in preparation for his 5 km swim in Marine Stadium in Long Beach on September 23rd, “I swim for the same reasons others do: to challenge myself and to prove something to myself.”

The proof is in the pudding – Craig Dietz is quite simply a star of the open water swimming world.