How Old Are Swimmers In The Molokai Channel? 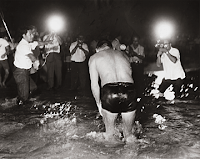 The Kaiwi Channel, also popularly known as the Molokai Channel), is part of the Oceans Seven.

The Molokai Channel has a lot to challenge the marathon swimmer…of all ages. To date, there have been 13 different people who have crossed the Molokai Channel a total of 15 different times with two people going in the Oahu-to-Molokai direction and four members of the Half Century Club.

The exclusive Molokai Channel club include:

* Member of the International Marathon Swimming Hall of Fame

** 12 hours and 53 minutes to hold the current world record in the channel.