How To Get Girls In The Open Water 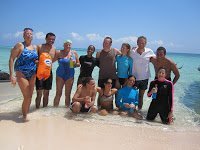 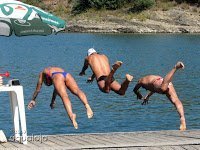 Leslie Andrews, a former Disney and ESPN executive, wrote a commentary called How To Get Girls in Sports Illustrated Magazine on how the game of golf can attract more women to the game. Andrews writes, “Golf is more of a social activity for most women, not a game or sport. Dig around and find a social angle for the girl or woman in your life. Encourage the girl or woman in your life to take up golf with a friend or two – women will be far less likely to quit if they have a buddy to play with.” The author of Even Par: How Golf Helps Women Gain the Upper Hand in Business continues, “Go with her the first time. Think of this as akin to teaching a kid how to ride a bike. Get her going and jog alongside, holding the seat until you’re sure she’s on her way. Then let go, and watch her enjoy the trip.” When we observe the global community of open water swimming, from San Francisco to Sydney, Japan to Jamaica, Rio to Rome, the doors are wide open for women – the fastest growing demographic in the sport. The ambiance of inclusion and the traditional supportive role of mentors in the open water world set the stage for the mixing of the genders in the open water community. Both genders are comfortable and confident in their swimsuits among mixed company, no matter the age, shape or size. Smiles, passion and a sense of adventure are the passports to entry. In lakes, bays and oceans, men and women socialize, train and race together on friendly terms. The camaraderie and collegiality before and after training sessions and competitive races among those swimmers of all ages, backgrounds and abilities lead to a situation that is both comfortable and inviting to all. Fins nor not, wetsuits or not, marathoners or not, men and women are more focused on the dynamic elements of the open water. In the water and out, men and women freely and cheerfully share advice on starts, feeding, equipment, coaches, pilots, paddlers, techniques, tactics and training. There are, on occasion, a few generic differences that are observed. While men (and competitively-minded women) regularly smash into one another at the starts and turns in races, driving adrenalin levels skyward as they refuse to give each other any ground, not all women are so intent to gain the upper hand. Sometimes, we have observed two women who inadvertently swim into one another in a race stop. They stop, look at one another, mutually apologize and ask if each other is OK. With a smile and nod, the two compatriots take off knowing they are part of the growing global community. Men and women, boys and girls…all part of a greater whole in the open water swimming world…where everyone is on even par. Copyright © 2008 – 2012 by World Open Water Swimming Association