How To Measure A Circumnavigation Open Water Swim 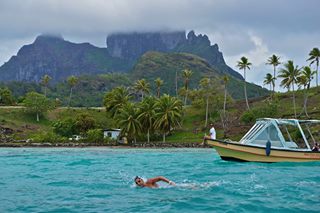 It is easy to measure the distance from point to point in a channel swim or marathon swim. But how do you measure a circumnavigation swim* around an island?

After the swimmer and crew selects a starting and finishing point, the correct and globally accepted distance is the total length of the shortest polygonal straight line segments that completely surround the island.

The swimmer and relays, of course, will swim a greater distance that this distance, very much like everyone swims a further distance that the 18.9 nautical mile or 33.7 km distance between England and France when swimming the English Channel due to currents, wind, waves and tidal flows.

Photo above shows Alex Kostich doing a circumnavigation around Bora Bora in French Polynesia in the South Pacific.