How To Qualify In Shanghai For The Olympics In Open Water 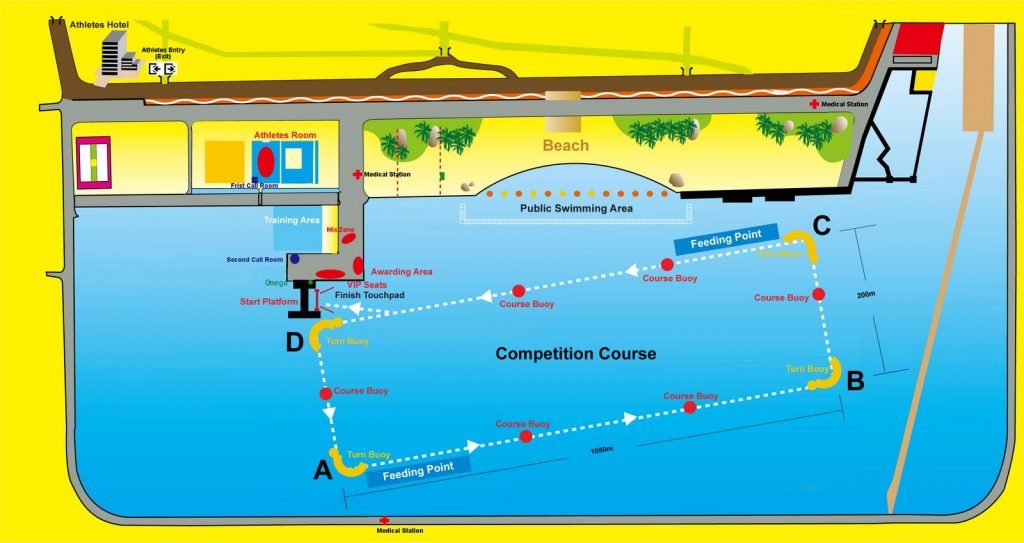 1. Acclimate to warm-weather, warm-water conditions. The top athletes have spent time in warm-weather, warm-water conditions at training camps from the Canary Islands to Shanghai over the last few months.
2. Acclimate to rough water conditions (surface chop). The top athletes are powerful with strong cores and balanced strokes to handle two hours of constant turbulence.
3. Hydrate well, pre-race and in-race. The top athletes have been well-hydrated throughout their training and the days leading up to the competition and will have flawless exchanges with their coaches on the two floating pontoons on the course.
4. No sense of panic. With over 60 men and over 50 women starting from a floating pontoon and swimming 200 meters to the first buoy, there is potential for mass collisions in the first part of the race. While many top athletes will take the race out hard to avoid the huge scrum around the first turn buoy, they will also not panic if they fall temporarily behind the lead pack. There is plenty of time in a two-hour race with its inevitable lulls for an athlete to catch up to the lead pack.
5. Sleep well. While a majority of marathon swimmers reportedly have problems with insomnia before a major competition, top athletes will be well-rested and cool, calm and composed in the hours leading up to the swim and the minutes leading up to the start.
6. Team support. The top athletes benefit from the support provided to them from their national federations: experienced coaches, cool-minded managers and medical doctors.
7. Stick with the lead pack. The pace will be fast, especially for the women. While there are always exceptions to the rule, it will be almost impossible for an athlete to catch up if they spot the fastest swimmers too much of a lead.
8. High navigational IQ. The course is fundamentally easy – one 2.5K rectangle – with numerous easy-to-sight buoys lining the course. However, the finish is slightly off-line and every single straight-line tangent that can be taken is an advantage over one’s competitors.
9. Expect the Unexpected. It is highly unlikely anyone will have the perfect race. Things can happen and will happen. Athletes who can put temporary set-ups behind them will be better positioned for the end-of-the-race all-out sprint.
10. Timing of the Finish. There will be photo finishes at the end of the race. Over a 2-hour race, the athletes will be separated only slightly. The ability of an athlete to hit the out-of-the-water finish just right may be the difference between racing in London and not.