How To Swim Around Curves In A River 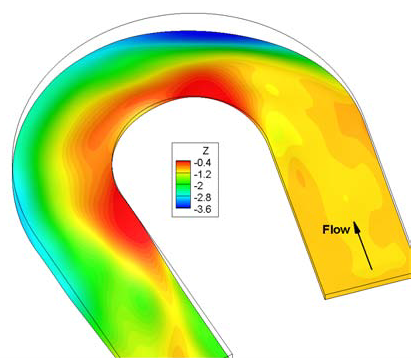 Captain Tim Johnson attempted to solve one of the most vexing problems in open water swimming.

It has to do with swimming around curves in river swims.

The question is which is faster: cutting the corner or swimming out with the faster current on the outside edge? For swims like the Manhattan Island Marathon Swim or certain swims that go around peninsulas or islands, it is an answer worth investigating.

The author of History of Open-Water Marathon Swimming continues, “This has a tangential application in a proposed swim, say in the Florida Straits, because the Gulf Stream is going around a big, big curve, a 90-mile-wide river that takes a 90º left turn, and then narrows.

When a river turns either to the right or the left, the inside shore usually will have a shallower depth due to the slower water dropping particles that were being carried along in the faster moving water. The water as it enter the bend will want to keep going straight and as the inner bank turns away, an eddy develops. Depending on the extent of the bend, some eddies can occupy from ¼ to ½ the width of the river. This forces even more water into a narrower part along the outside shore creating a fast channel.

The course through the bend depends on (1) the speed of the current entering, (2) the severity of the turn, (3) the depth of the river, and (4) the width of the river. The idea is to avoid the eddy along the inside shore. Of the four variables, three are constant so a good answer on one current may be the wrong answer on a faster current. My suggestion is to stay with the faster current for as long as possible but avoid going to the outside shore. On slow currents, turn when 1/3 past the start of the bend but wait no more than 2/3 on fast currents.

In the graphic, red is shallow water, yellow is the nominal depth, with green to blue increasing graduated depth showing the channel cut by the fast water