How Wild Can It Be? 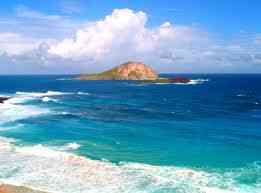 Wild swimming…how wild can it be?

As tranquil as you wish, or as gnarly, and risk-taking as you dare.

You can enjoy the open water with like-minded friends or challenge yourself with daredevil colleagues. You can swim in water that is close to freezing in Ireland, or through huge surf as it pounds the shores of Hawaii. You can swim among sharks around the coastlines of South Africa or among alligators in Florida, orcas in Washington, hippos in Africa, and sea snakes in Okinawa.

You can push yourself against a tidal flow as it rushes into in an inlet, or against currents around an island, or against a river current, or at night with friends. Or more simply and tranquilly, you can take a dip of undefined distances for undetermined amounts of time in cool waters during the summer. One wild swim is certainly around Rabbit Island off the coast of Makapu’u Beach of Oahu.

Rabbit Island or Manana Island is a small, uninhabited island conveniently located off of Makapu’u Beach where the surf frequently pounds the northern shores of Oahu. It is an allure for only the most daring and vastly experienced swimmers with escorts. Risks abound. The island presents a challenging, risk-inherent swim around an incredibly gorgeous seabird sanctuary island.

From less than one-mile stretch from shore to island is nearly always choppy and lumpy with strong currents and sharks of various types. Under the bright blue tropical skies punctuated with fluffy white clouds, the winds that scream across the Pacific oasis are as ubiquitous as the surf. But the surface turbulence only mirrors the water under the surface. The underwater currents swish around the northwest corner of Oahu, pushing around swimmers like socks in a washing machine.

After the swimmer negotiate the pounding surf close to shore, they hit large ocean swells pulsating with energy. The surf and swells act as nature’s protection of Rabbit Island. It is as if Mother Nature intended the island to remain unexplored and uninhabited.

But once swimmers navigate their way to the island, they are taken back in time. Like lost sailors of previous centuries being washed up on an uncharted island, the experience is unworldly for modern-day swimmers. The sounds of society melt away – and the stage is entirely that of Mother Nature – and She wishes no visitors. But with a backstage pass, intrepid open water swimmers can experience a world rarely seen by other humans. Like astronauts venturing on the back side of the moon, swimmers also envelope themselves with unknown risks out of sight of mankind.

On the backside of Rabbit Island, the wily wisdom of ocean swimmers is pitted against the strength and fury of nature. Do they swim close to shore or swing wide? Do they ignore the dark shadows underneath or try to determine what is following them? Do they speed up to get the backside over with or do they save their strength for the unexpected?

The backside can be incredibly gnarly providing an ultimate adrenalin rush or flat-out scary never to be attempted again. Whatever the case, it is truly wild swimming at its risk-taking best.

Note: If no experienced lifeguards serving as vigilant escorts are available, swimmers are strongly advised to avoid swimming in this area.