Humor And Hiking, Smiling And Swimming In Laguna Beach 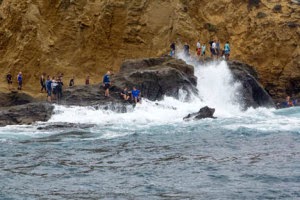 As a courtesy, Gary Cogorno, Scott McCarter, and Nuby Sears, organizers of the Laguna Beach Aquathon, always invite the President of the United States to their Aquathon in Southern California.

Surprisingly in 1998, President Bill Clinton reportedly accepted their invitation to attend. “We were not allowed to make this public. Secret Service men and women were present.”

But it is highly unlikely that Secret Service bodyguards are unlikely to be working at the 27th annual Laguna Beach Aquathon, a non-competitive 8-mile walk-swim biathlon along the pristine beaches of Laguna Beach from Emerald Bay to Monarch Beach in Laguna, California.

What Alan Wolf, Bailey Smith, Mark Disman, and John Heatley started in the 1980s among themselves has grown to be a fun-filled, informal adventure for people of all ages and backgrounds.

A review of the equipment description on the website is indicative of their casual view of participation. “Swimming suit (required), some rubber body wear suggested. Reef Walkers, aquasocks, or other amphibious shoes (required), sunscreen (required, make sure its waterproof), goggles, masks, snorkels (optional: it’s a sight-seeing tour and the snorkeling is generally awesome), fins (optional: difficult getting in and out of surf, hard to carry while walking or climbing, can cause leg cramps, but great for swimming), Tummy Pack (optional: good for holding aquasocks when using fins in the water, also provides a belt for hanging fins while walking, a drag in the water), and kickboards (optional; good buoyancy for hard bodies).”

The 27th annual event will be held on September 14th starting at Emerald Bay. For more information, visit here.