Husband And Wife Swim Far On A Hawaiian Vacation 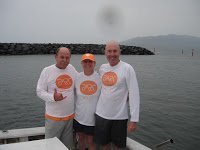 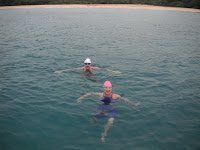 Their record is remarkable. Their goals are ambitious. Their commitment is unquestionable. Year and year, the Palfrey’s return to Hawaii.

Chris and Penny have knocked off yet another channel in the Hawaiian islands.

Yesterday, they completed the first of their planned 2011 swims, the Alalakeiki Channel from Kaho’olawe to Maui, a distance of 7 miles (11.5K). “We started from Ule Point on the northeast side of Kaho’olawe and were greeted by schools of pelagic fish next to a sheer 200-foot wall drop off, making for a spectatular start with a back drop of the massive rugged cliffs of Kaho’olawe,” explained Molokai Channel record holder Chris.

“The conditions were calm at the start, with surprisingly warm 25°C (77°F ) water. It was ideal for swimming.” But it is rare in Hawaii that a swim remains perfect throughout the entire distance – there are always obstacles. “Maybe the warm water brought in the jellyfish as we received regular stings throughout the swim. Despite relatively calm conditions, there was a very strong cross current which quickly carried us south, forcing us to battle up hill for the last half of the swim, with our pace slowing to a slow crawl.”

Since the Alalakeiki Channel was first crossed in 1977 by Bill Lawrence and Solomon Fernandez, there have been 12 crossings by eight people. Of these, only 3 men have swum in the direction we did. The last crossing before today was in 2006.

The Palfrey‘s channel record in Hawaii stands at 7 – with a few more channels planned for the upcoming week: