I Could Cry Now When I Think About It 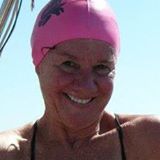 It was quite an adventure during this year’s Manhattan Island Marathon Swim where a majority of the swimmers had to be boat assisted. Ellery McGowan, the oldest person in the 28.5-mile circumnavigation of Manhattan Island tells her story against the elements:

Daily News of Open Water Swimming: How did your preparation help you compete in the Manhattan Island Marathon Swim?
Ellery McGowan: I kept up my training after the 2012 Ederle Swim which meant swimming in a 25m pool in 27ºC (80ºF) water doing 15,000m a week on average, increasing to 20,000m + plus 1 session of Pilates, one of Gyrotonics, one of Fitball, and one of spinning a week.

I was out in November for a few weeks with a fractured metatarsal, but I could kick with one leg. But I could not play tennis, nor do the spin classes
. I did the long distance training camp at the beginning of April in Mallorca with SwimTrek and completed my 4-hour qualifying swim in water of 13.8ºC (56ºF) and jellyfish galore. From the end of April, I trained outside 5 times a week at our local 50m lido. On most days, the air was cold. Often it was raining, but I knew I had to do it. I had some friends who would swim with me for a couple of kilometers and bring coffee down for when I finished. There was just one day when it was so miserable, I did not go in. This pool averaged 22ºC (71ºF) and I often said to myself, “The air will be this in Manhattan but the water will be colder“.

I returned to Mallorca the week before Manhattan Island Marathon Swim to do the BEST OPEN WATER FESTIVAL and the SwimSmooth Training camp. This entailed sea swimming each day as well as 1-2 hours in the pool and some land training. The rough seas were again a good experience and Matthew O’Connor (the BEST co-owner) said I handled the waves well. That was good to know.

Daily News of Open Water Swimming: Were you worried at any time that they might pull you from the race?
Ellery McGowan: Some weeks I was apprehensive about being able to do it knowing that I was by far the oldest and slowest, but I knew I had it in me. I was actually rather excited the day before and looking forward to it, especially knowing the weather forecast was going to be better than the week before’s prediction. I knew once I hit the water I would be fine, but on the Thursday when I did the round Manhattan boat trip we went against the tide up the East. It went through my mind that we might get caught, me especially but then I brushed that aside knowing the organisers would have taken all scenarios into account.

Daily News of Open Water Swimming: What was the hardest part of the race?
Ellery McGowan: Little did I realise at the Roosevelt Bridge, the race organiser made the decision to pull all the swimmers apart from the elite who had made it through as the rain from Andrea and our delayed start by 1 hour and a quarter meant we missed the weaker than normal tide going up the East. I accepted this, but was delighted that were allowed to get back in after the foot bridge. Mind you I did not want to get back in, but I had another costume, hot tea and was warm again. My daughter-in-law did not want me to go back in but my son advised me to “just swim the Harlem”. I thought yes. Why not? The Harlem was cold, very cold in patches and learnt it was 56-58ºF (13-14ºC) later on. There was a lot of debris but I enjoyed seeing Yankee Stadium, the rowing course, the boathouse, and even spoke to a random swimmer in a white hat. It was “one bridge at a time”. Then I saw the big C for Columbia’s rowers and their new sports complex and I was never so pleased to see Spuyten Duyvil Bridge. It was tough coming into the Hudson, like swimming through a whirl pool but the water temperature was heaven in comparison.

Daily News of Open Water Swimming: How did you feel as you were swimming down the Hudson River towards the finish?
Ellery McGowan: The Hudson was rough, wind coming up the river. It is such a long way. I had done the rough stuff in Mallorca, the current was with me. My mantra “relax”,from Cassie Patten, “enjoy” and turn “one arm after the other” kept me going. I loved the George Washington Bridge, seeing the little red lighthouse, even the water treatment plant, and rubbish barge depot. When I hit 42nd St where Concorde and Trident are, I knew my way home – Chelsea Piers, Pier 25, the apartment block where my son and his family lived, the World Trade Center, North Cove, South Cove and finally Pier A. The crowds on the piers were great and I gave a few waves along the way. However, I did suffer with unbelievable cramps in my inner thighs, especially when feeding. My swimmers always use even a toe cramp as an excuse to get out of the pool but I know one can swim through them and I can. I didn’t have any negative thoughts on this stretch at all, my body was warm and I could take the waves and wind bashing.

Daily News of Open Water Swimming: Did you take any special British or Australian food or drink during the swim?
Ellery McGowan: We used to take Maxim but now it is Maxi, still a high carbohydrate fuel which I mixed up Friday morning with one teaspoon of fructose and Robinson’s Apple and Blackcurrant squash. My mixture was 150 ml (double strength) diluted with 150 ml of hot water which I took every hour and on the half hour an Isogel, an Australian product which does not need water to wash it down. Two of these were substituted with Vipergel (Maxi fuel) which had caffeine. Then of course every two hours I had half a banana. Feeds went to 25 minutes along the way due to the cold.

Daily News of Open Water Swimming: Who was your kayaker and on your support team?
Ellery McGowan: My kayaker was Stephen Ahearn whom I met on the water, a very efficient and positive guy. My escort boat was “No Problem”, a good omen really as “no problems” is a very Australian saying. Ed Scola was the skipper. My support team were my son Angus and his wife Renata who live in Connecticut now. They were amazing and Angus had packed extra towels warm clothes for me. They crewed for me on the Ederle swim last year. Whenever I looked up I would see Angus filming, handing feeds over to Stephen, and always a big smile and thumbs up from Renata.

Daily News of Open Water Swimming: What was the most enjoyable about the entire experience?
Ellery McGowan: I had been tired for weeks from training and working but I am thrilled that I made it round even with the Boat Assistance. I am not angry that we did not get away on time as New York City had a tough time, it was bad luck. I’m happy we were able to swim and I can say I did the Harlem, the Hudson and nearly all the East. I feel satisfied and I must say it was all enjoyable except for the cold in the Harlem. That homeward stretch was amazing and I could cry now when I think about it.