I Was Swimming, But I Wasn’t Conscious 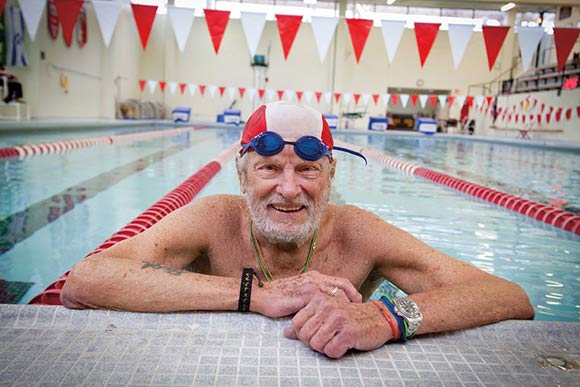 “I was swimming, but I wasn’t conscious,” explains Ted Erikson often when describing his Farallon Islands swim to the Golden Gate Bridge in 1967, a feat that has yet to be replicated.

He competed against Greta Andersen and Abdul Latif Abou Heif in the heydays of the 1960’s professional marathon swimming circuit, the 1960’s English Channel crossings, and the coaching of his son on the first triple-crossing of the English Channel. Those first-person recollections and stories should not be lost to history.

So the Daily News of Open Water Swimming requested an interview with the Chicago resident who replied in the affirmative. He quickly did some calculations, asked a few questions, and within a short period, he replied via email, “I will be there Friday around 2 pm.”

Little did we know that he drove from Chicago in the middle of America to Huntington Beach in Southern California, a total distance of 2,026 miles (3,260 km). And he was a few minutes early with a broad smile on his face and a swimsuit in his vehicle. When distance, dynamic elements, and mental exercise are in the equation, Erikson rarely gets the answer wrong.

The Illinois Institute of Technology recently published a great insight into one of its own. The article on Erikson is here where Vito Bialla calls the former professional marathon swimmer, “Quite the brilliant man, he is an Einstein with swim goggles.”

H2Open Magazine will also publish an article in its April edition about Erikson’s mano-a-mano battle against Abou-Heif in 1963. The article describes Erikson’s tactics in the middle of the night during that famous 60-mile Lake Michigan race, arguably the most brilliant and daring move in the annals of professional marathon swimming.