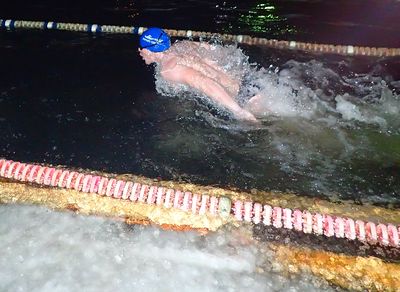 The goal of the ICE Cup – International Ice Swimming Association World Cup – is to establish a circuit with affiliated ice swimming competitions around the globe. “We want to encourage swimmers to travel and participate in events in other countries,” says founder Ram Barkai. “The point system adopted from the FINA professional open water swimming circuits with some modifications and additions. The Ice adds a layer of complexity to a global circuit.

However, such a global circuit creates the situation and opportunity for a good, fair, global, annual competition. We offer added challenge or bonus points for the colder water temperatures.

All the points calculations and rankings will be updated and posted by the International Ice Swimming Association [IISA] after every event.”

The IISA official season runs from July 1st to April 31st with May and June serving as the official offseason in the inaugural season. “But events may be added if we have a real demand for events during those months,” explained Barkai who outlined the new circuit below:

Basic Rules
• Any IISA 1 km events with a minimum of 10 participants/starters can qualify to participate in the ICE Cup
• Event organisers must receive pre-approval from the IISA before their event is conducted by a submission of its event’s request and dates
• Events cannot be approved to be part of the ICE Cup after the event is completed
• ICE Cup event organizers must contribute €5 per swimmer to the IISA towards the annual ICE Cup Awards. This amount will be capped at €100.
• Events must be conducted within IISA season
• World Cup winners will be announced in May at the end of every season
• IISA World Championship event is not part of the ICE Cup circuit
• ICE Cup records will be ratified and published by IISA
• Event organiser can advertise the event as part of IISA Ice Cup by checking off the required selection box when creating the event
• The event name should specify that it is an IISA ICE Cup event
• A country can host only one ICE Cup event per season
• IISA reserves its right to reject a record or event as part of the ICE Cup if rules have not been followed correctly

Participation and Qualifications
• Any swimmer who qualifies to participate in an IISA 1 km event can take part in the ICE Cup
• A maximum of 5 events are allowed for an individual’s point accumulation
• The best events’ times will be taken into the point system if one participates in more than 5 events
• An ICE Bonus would be added for events in lower water temperatures [see below]
• The ICE Cup will have two categories: men and women

Point System
• At the beginning of every season (July 1st), the IISA will use the existing world record for men and women and set it as the Base Time for the season
• Each swim will afford points for the swimmer, based on the following formula:
o Base Points = [(BaseTime / Swim Time in mm:ss:nn) ^ 3] * 1000
• The Ice Bonus will afford additional points subject to water temperature:
o Ice Bonus = (5.00 – Water-Temperature in Celsius) * 20
• Approximations:
o Slow swimmer will benefit significantly from lower temperatures
§ A swim time of 20:00 minutes at 0°C may give the swimmer close to 2:00 minutes in Ice Bonus points
o The fastest swimmer may receive up to 30 seconds in an ICE Bonus

Country ICE Cup Introduction
• The purpose of the Country Cup is to build country spirit and competition in the IISA ICE Cup. The award will be based on participation and placing.
• The country ICE Cup will be a trophy that will travel from country to country at the responsibility of the Country Federation president/chair person
• In any ICE Cup event, each participant who has completed a race will contribute points to his/her country

Vasilly Mosin of Russia is shown above competing in the Tyumen Open Cup in Siberia in 0ºC water and -6ºC air temperatures. He was nominated for the 2016 World Open Water Swimming Performance of the Year. Photo by Nuala Moore, a fellow ice swimmer from Ireland.