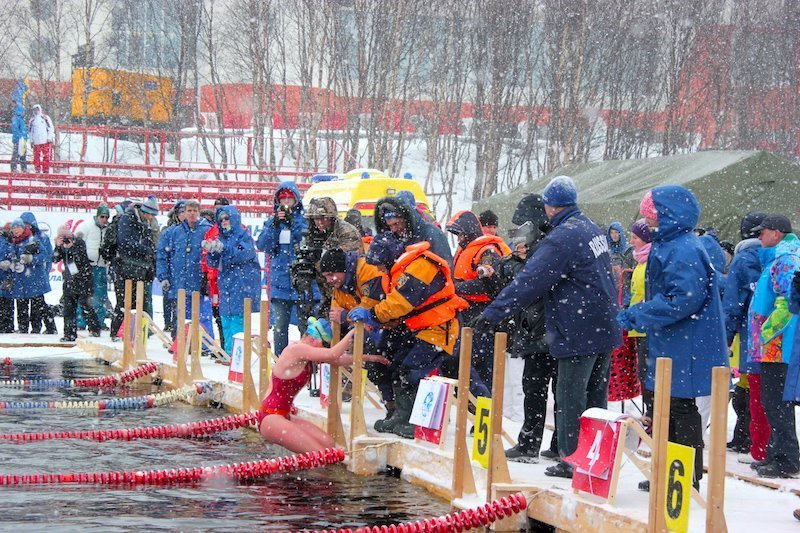 The Oceans Seven has encouraged many people to challenge themselves in bodies of water from the English Channel, North Channel, and Strait of Gibraltar to the Molokai Channel, Tsugaru Channel, Cook Strait and Catalina Channel.

The Ice Sevens Challenge, or simply Ice Sevens, is another massively difficult swimming concept. “It is the emerging sport of ice swimming‘s equivalent of the Oceans Seven.

To achieve the Ice Sevens, a swimmer must complete seven different Ice Miles in seven different locations under standard ice swimming rules (i.e., no wetsuit and no neoprene hat) as defined by the International Ice Swimming Association.

“The Ice Sevens is a good idea; it is a series of epic global adventures,” says Ram Barkai of the International Ice Swimming Association that is responsible for ratifying the swims. “We like the ‘adventure flavour’ linked to an Ice Mile. Swimmers must strictly adhere to the rules of the IISA to achieve the Ice Sevens including mandatory videos of their entry, swim and exit.

The concept of the Seven Summits, the Oceans Sevens and the Ice Sevens are massive logistical, physiological, and psychological challenges somewhere in the seven continents of the world that require a huge amount of training, skill, patience and strategical intelligence
.”

With one important caveat, one of the seven Ice Miles must be a documented Zero Ice Mile (defined as a solo mile swim performed at below 1ºC).

Barkai, speaking on behalf of the International Ice Swimming Association, described the massive difficulty of the challenge. “We feel that the Ice Sevens challenge is something that will require people to visit the Ice around the world. It is a serious challenge that requires swimmers to plan and prepare, unlike participating in 1 km competitions where they just have to show up.”

Similar to Stephen Redmond of Ireland, Anna-Carin Nordin of Sweden, Michelle Macy and Darren Miller of the U.S.A., Adam Walker of the UK, and Kimberley Chambers of New Zealand, who will be the first pioneers to achieve the Ice Sevens?

Photo above by Nuala Moore of Ireland shows ice swimming in Murmansk, Russia.