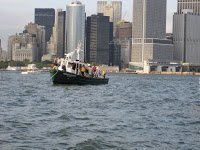 In response to recent press reports about Diana Nyad surrounding her upcoming Cuba swim in August, the NYC Swim provided the following historical information about swims around Manhattan Island.

The first woman to successful complete a non-stop circumnavigation was Ida Elinosky in 1916 who did it in 11 hours and 35 minutes – not Diana in 1975.

Over the next several years, several other women also completed the 28.5-mile swim including Anne Priller (Benoit) who set the women’s record in 9:01 in 1930.

In the intermediate years, pollution, wars and other factors limited swimming around Manhattan Island, but Diana came roaring back in 1975 to set a new overall record of 7 hours and 57 minutes in a well-documented circumnavigation. Since her record swim, more than 600 swimmers have circled Manhattan with the overall record still held by a woman: 5 hours and 45 minutes by Shelley Taylor-Smith of Australia, set in 1995.

Results of all past swims around Manhattan, including the latest Manhattan Island Marathon Swim – won by a woman – are posted here.

NYC Swim posted a warm wish to Diana, “With so many accomplishments to her credit, Diana’s record needs no embellishment. We welcome her return to the sport and the increased visibility she brings to marathon swimming.”

Photo of the NYC Pro Swim off of Manhattan Island by the NYC Swim.