If Dr. Oz Was An Open Water Swimmer 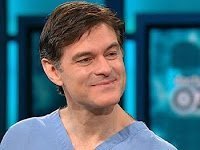 Dr. Oz is an accomplished author, surgeon, health advocate and American television personality. A former water polo player, he provided 28 steps to start off the new year. His friend and fellow television star and swimmer Oprah Winfrey agreed on these daily bits of advice.

His first two bits of advice are to (1) Go Green, and (2) Indulge in Dark Chocolate. That sounds like excellent advice for open water swimmers, especially those who swim in cooler waters for longer distances.

And if the water is salty, some swimmers believe the astringent taste is minimized, while others prefer coffee, other kinds of teas or hot chocolate.

Dr. Oz, who was definitely one of the hardest working athletes this publication has ever seen, continues about an open water swimming favorite: chocolate. “Flavonols, the antioxidant-rich compounds found in cocoa, improve circulation. Now new research indicates that because those compounds increase blood flow to the brain, they may also help you see more clearly. Two and a half hours after consuming 720 milligrams of flavonols (the amount in about one ounce of dark chocolate), study participants’ visual function and ability to detect motion direction improved dramatically.”

So it seems, if you are looking for a landmark or the next turn buoy in a race, wake up in the morning to a cup of green tea and eat some chocolate before your race.