If Neptune And Poseidon Raced In The Open Water 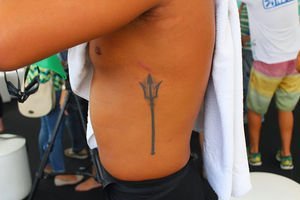 If Neptune (Roman god) and Poseidon (Greek god) both set aside their tridents and raced in the open water, who might win in this mythical competition?

Poseidon, whose preferred location is the island of Atlantis, would logically feel comfortable with waves and winds and probably would take down Neptune in rough water conditions that are more likely in the ocean rather than fresh water venues.

On the other hand, Neptune was seen as a god of springs, lakes and rivers before becoming also a god of the sea, as is testified by the numerous findings of inscriptions mentioning him in the proximity of such locations. With that background, it seems logical that in lakes and other fresh water locations, Neptune would win a head-to-head race against Poseidon.