If Triathlons Did Not Include Swimming 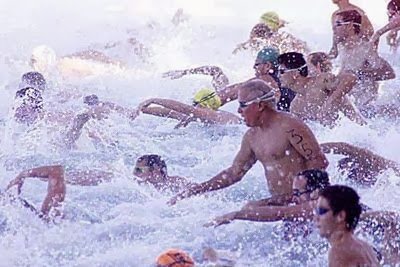 When we swim, our minds wander…and we were thinking…

The three basic components that were the inspiration behind the Ironman were the Waikiki Roughwater Swim, the Around-Oahu Bike Race and the Honolulu Marathon.

As an unprecedented test of who had greater endurance among ocean swimmers, cyclists and marathon runners, the Ironman was born.

But what if the Waikiki Roughwater Swim had not entered the Ironman equation? What if the cyclists and runners had not considered ocean swimming as part of their trio of disciplines? What could have possibly been the alternative for the 2.4-mile first leg of an Ironman?

Since the originators of the Ironman were in Honolulu, Hawaii at the time of their initial discussions, we assume the possible alternatives would have been somewhere in Hawaii or around the Pacific Rim. Board surfing or kitesurfing are ideas that involve the ocean, but the skills of catching and riding a wave is too far removed from an endurance event. Cross-country running is another alternative, but it is too close in nature to the Honolulu Marathon. Outrigger paddling is an alternative, but it is a team-based sport not an individual test of endurance. Rollerskating is an alternative, but it does not involve the ocean.

But kayaking and paddle boarding, two popular marine activities in Hawaii and elsewhere, could have been two possible alternatives especially since both sports have long endurance events and involve the ocean. So instead of wetsuits, we could have seen Ironmen and Ironwomen working out in kayaks or paddle boards. So instead of a huge influx of land-based endurance athletes taking up swimming and joining masters swimming pods around the world, the triathletes could have been in the market for kayaks and paddle boards.

This theoretical change in history could have dramatically changed the landscape for open water swimming and either the sport of kayaking or paddle boarding. But we are glad that history evolved as it has.