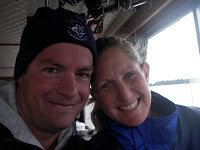 Bruckner Chase is respected far and wide, from the East to West Coast of the United States, for his strong commitment to the sport, for his inspirational messages, the enviromental themes he champions and the charity swims he undertakes like his Monterey Bay Solo Marathon Swim that started at 4 am Pacific Time this Tuesday morning.

Bruckner continues to head closer and closer to the finish this afternoon.

As we were reading up on Bruckner, we saw a ABC-TV telecast that reported that Bruckner is swimming from Santa Cruz to Monterey without a wetsuit (see here).

In ABC’s televised news report, it appears that Bruckner is wearing more than is allowed under traditional English Channel rules.

Because Cindy Cleveland has been the only individual to conquer the cold water (under 58°F or 14°C) and jellyfish, accurately defining the additional torso coverage is an important semantic difference that the mainstream media may not fully understand.

Torso coverage or not, we look forward to reporting Bruckner’s success later this afternoon in crossing Monterey Bay and calling attention to our invaluable marine sanctuaries and promoting healthy oceans.

Bruckner should finish around 4 pm Pacific Time to kick-off the BLUE Ocean Film Festival in Monterey. Fans can follow Bruckner’s swim here on Twitter where he has encountered a pod of dolphins and a blue whale.

Photo of Bruckner and his wife Michelle who is onboard Bruckner’s escort boat.