In A Blink Of An Eye, Accidents Happen 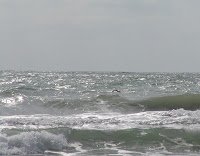 HUNTINGTON BEACH. As open water swimmers know all too well, there are times when marine vessels (leisure boats, escort boats, media boats, safety boats, JetSkis, wave runners) get in the path of swimmers. There are also times when swimmers take an ill-advised tangent across the path of motorized vessels – or simply go off-course into unprotected waters where leisure boats, wind surfers, rowers or water skiers are also present.

Sometimes, the intersection of swimmers and boats is done in calm water; sometimes this occurs in rough water.

Sometimes, the athletes are easily seen, but many times swimmers are not easily seen due to waves, sun’s glare, fog, no visible clues or simply the inattention of the boat’s pilot and crew.

In most cases, swimmers assume that they are seen, either because they are in a race or they are wearing a cap. While this is not necessarily true, it is always advisable to swim with the assumption that you are NOT visible to others on boats, JetSkis or windsurfing boards.

If a motor is heard underwater or a windsurfer is spotted nearby or even off in the distance, the most prudent action to take is to stop and ascertain what direction and speed the boat or craft is headed. Even if there is a remote possibility of an intersection, it is best to stop and wave in order to become more visible. Shout and splash water if the craft is really close. It is better to be safe rather than sorry, cautious rather than oblivious.

On the other hand, if you are driving a boat and caught where swimmers are near, the most prudent actions to take are to immediately use a fog horn or whistle to attract the swimmer’s attention. Boaters should never assume that swimmers can either hear or see them.

If a boater is caught in a pack with swimmers all around (left, right, front, rear) and the currents and waves make maneuverability difficult, a boater should immediately turn his engine off. The last thing they want to happen is to have an accident with the propeller.

Related articles on accidents between swimmer and boat are here (Maui) and here (New York).