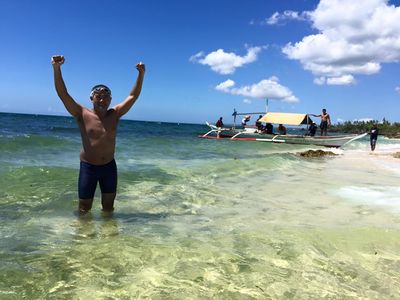 In 1521 during the first circumnavigation of the Earth, renowned explorer Ferdinand Magellan and his crew were the first Europeans to sail through the Surigao Strait in the Philippines.

Tomorrow, Ingemar Patiño Macarine will attempt to be the first solo swimmer to swim across the Surigao Strait between Sumilon Island to Barangay Lipata in Surigao City.

Macarine described his next swim in the Philippines. “Tomorrow, I will attempt to conquer the historic Surigao Strait that is known for its strong and crisscrossing currents by swimming solo and non-stop from Sumilon Island to Barangay Lipata in Surigao City.”

His crossing is approximately 12 km.

The Surigao Strait (Filipino: Kipot ng Surigaw) is a strait in the southern Philippines between the Bohol Sea and the Leyte Gulf of the Philippine Sea.

The strait is deep and has strong currents up to 8 knots (15 km/h; 9.2 mph) with abundant marine life including clownfish, lionfish, barracuda, dolphins, and massive coral formations.

Photo shows Ingemar Patiño Macarine completing the 17 km crossing of the Cebu Channel in the Philippines in 7 hours 45 minutes.