Inequality In The Open Water – Part 1 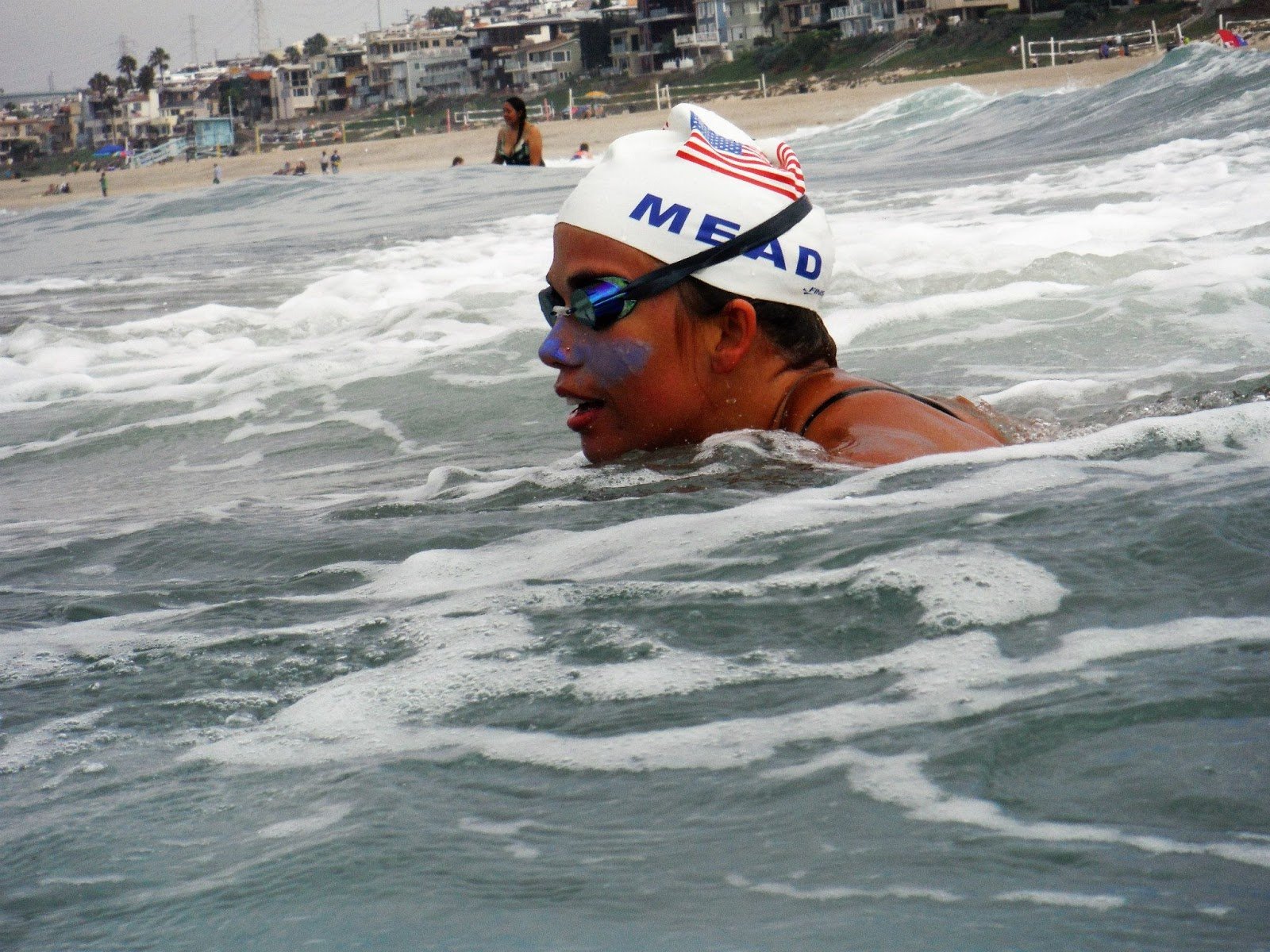 In 1991, Australian Shelley Taylor-Smith won the overall title for the World Professional Marathon Swimming Federation. She was the top swimmer among all the male and female participants in the professional series of marathon races that ranged from the Maratona del Golfo Capri-Napoli in Italy to the Traversée internationale du lac St-Jean in Canada.

“Racing against the men made me better,” frankly admitted the 25 km world champion from Australia.

But was it fair that women had to swim mano-a-mano against the male professional marathon swimmers? Some said no; some said yes; but most athletes just accepted the status quo. In some races, the top three women received a bit extra prize money (from US$100 to US$1,000), but it was rare that the top woman – sans Taylor-Smith – won the top cash prizes.

History was dramatically changed in 1991. When Taylor-Smith beat all the top male marathoners of her era during the 1991 season, times and mindsets quickly transformed. It was time to change as both men and women pushed for separate classifications for male and female competitors. Their voices were heard by FINA that took over the World Professional Marathon Swimming Federation circuit. So from the 1992 season on, the men and women earned separate and equal prize money.

Separate but equal was finally considered to be fair in the professional marathon swimming world.

While at the FINA world-class level and on professional marathon swimming circuit, equality of prize money and recognition became the status quo in the 1990s, more than a few open water races remains in a time warp. There still remain open water swimming races like the Newport Beach Pier to Pier ocean swim where prize money is only available to the top three swimmers (usually male).

In an extensive global sampling and survey conducted several years ago by the World Open Water Swimming Association, the average female time for open water races over 5 km were faster than the average male times. This difference remained true whether the races are held in warm water or cold water, rough water or calm water. “The time differential between male and female swimmers culminates in a remarkably wide time differential between the average male and female swimmers in the English Channel,” says Steven Munatones of the World Open Water Swimming Association.

However, at the top echelon of open water swimming at every level (amateur or professional, FINA or invitational) and under every condition (ice swims in lake-carved pool under 5°C to very warm tropical races in water over 30°C), the top males remain faster than the top females. For example, in FINA 10 km marathon swims in Asia, Europe, South America and North America, the average winning times among the top men are at least 7+ minutes faster than the female average winning females.

But at the local level, frustrations remain.

In fact, it is a deep-seated complaint among professional swimmers like Mallory Mead of California. When she was sixth overall and the first female at the Newport Beach Pier to Pier ocean swim in Southern California, Renae applauded the top three men who received a cash prize in the 2-mile charity race for Newport Beach lifeguards. But she was shocked and upset when the top three women received nothing. There was no separate prize money or awards for females.

Separate and unequal were obvious to Mead although according to the race registration sanctioned by the Southern Pacific Masters Swimming organization and U.S. Masters Swimming, “Awards are given to the 1st, 2nd, and 3rd Overall Finishers and 1st Place Divisional Awards, presented at conclusion of the swim.”

Mead was clearly upset. “[I] won an ocean race today and had to remind the race organizers that women are people too. After giving the top three men US$50 gift cards, they went right into the age group awards. After calling them out on the fact that they did not acknowledge the top three women, they fumbled through the results to figure out who the top three women were, and then tried to present me with a US$25 gift card.

I then had to call them out on the fact that they gave the men twice as much, so they gave me two gift cards.

I understand that being a race organizer is hard and mistakes are bound to happen in the moment, but as it stands when they were purchasing their prizes, it did not occur to them to purchase prizes for the women, nor did it occur to them later to compile women’s results. That’s not a mistake, that’s just an attitude that women don’t matter. I don’t love having to be that bad guy and call them out publicly, but I’m getting really tired of this

The Newport Pier to Pier swim is the sister swim of the Don Burns Corona del Mar 1 Mile Swim. They are both organized by the Newport Beach Ocean Lifeguard Association and serve as a charity swim to help support the lifeguard organization.

While the lifeguards attempted to equalize the prize money to the top female finisher at the end of the race at Mead’s urging, it will be interesting to see if their next USMS-sanctioned race will provide equal prizes to both men and women. Their next race has exactly the same pre-race written registration information, “Awards are given to 1st, 2nd and 3rd Place Overall Finishers and the 1st Place Divisional, presented at the conclusion of the event.”

Mead complained at the race and then afterwards on social media. “I went into that race with no expectation of receiving any sort of compensation, but I was caught off guard when it became clear that they had not prepared to recognize female finishers beyond age group awards. They literally were scanning overall awards to try and figure women’s results. It’s worth mentioning they used a timing system this year, so separating the women’s results should have been no problem, especially since awards were a good hour and a half after I finished.”

The response on social media was immediate and highly critical, notwithstanding USMS rule 303.1.1C that reads, “If awards are given for competitive swims, they shall be of equal value for men and women.”

Jo Swartz wrote, “That’s pathetic.” Julie Lowe, “Bravo!” Vicki Westphal Divane, “Wow…way to go Mallory!” Kent Cook, “We Cooks call that getting everyone on the same page. Well done.” Hope Marchionda, “That is horrible! Glad you stood up to them!” Anne Cleveland, “Women’s lives matter!” Kathleen Richter, “Glad you are speaking out.” Victoria Rian, “Good job!” Mike Tyson, “WTF? How is this still happening?” Carolyn Bennett, “Glad you spoke up.” Cindy Wagoner, “And if no one calls them on it, they continue. Good for you.” Katrina Ling, “Good for you.” Michael Brantley, “Way to go Mallory.” Diana McCandless, “Well that’s just embarrassing and ridiculous but anyway congratulations on winning an ocean race.” Morgan Huynh, “Good for you. That’s crap.” Katie Stapleton, “That’s BS. Congrats though on kicking ***.” Tico Clark, “WTG. That’s lame on their part.” Katie Smith, “Great job.” Kelly Weiss, “Wow that is insane. Good on you for standing your ground.” Ricardo Osorio, “I’m with you…shame on them.” Beth Barnes, “Good for you.” Louise Darlington, “Congrats on calling it right and on winning the race.” Matt Nelson, “It’s easy to say nothing. Good for you to be the voice that was heard. They are the ones with explaining to do – not you.”

While the response was strong online, other top women are a bit more laid back. Lexie Kelly, who was a previous overall winner (in both male and female categories), “It is just lifeguards running it and giving donated gift cards. If it were a professional race with more money at stake, it would be OK to make a big deal over the issue because it is how most athletes try to support themselves and cover their expenses. But most of these volunteers are pulling on races just out there to have a fun and safe race for a good cause.”

But Mead, who has done many of the same races as Kelly, has been upset at the treatment of the media attention and financial compensation of female swimmers in both domestic swims and international professional marathon races too. “I do relatively few local ocean swims. This was the first that I had done where prize money had been offered. However, I had a similar situation with media coverage at the Pier to Pier when I won [the women’s division] two years ago. Of course, they don’t have control over media coverage, they do have control over their Facebook page, on which they promoted the [overall] winner, but failed to mention there were two winners.

The compensation structure is standard on the FINA Open Water Swimming Grand Prix circuit, which is just as unjust. [For example], when I did the math, I determined that [at] a particular race, the first place women’s prize money [was] 40% less than the third-place man.

I will never forget a debate that occurred at Maratón Hernandarias-Paraná [88 km marathon race in Argentina]. One of the female swimmer’s coach pointed out, ‘Her ticket here didn’t cost any less than his’ and pointed to a male swimmer who had reacted very poorly when the suggestion had been made to even out the prize money
.”

If there are other races where the male and female prizes are different, please send the information on these events to [email protected] to we can continue to cover inequality in the sport.

It should be noted that of the 211 participants, only 182 swimmers finished in conditions that can be tough for many swimmers. So while the Newport Beach lifeguards took their lumps on social media regarding equal prizes in their 2016 race, they focused on their primary responsibilities and helped keep the entire field safe.

Inequality In The Open Water – Part 2 is posted here.