Ingemar Macarine Swims In Celebration Of The Environment 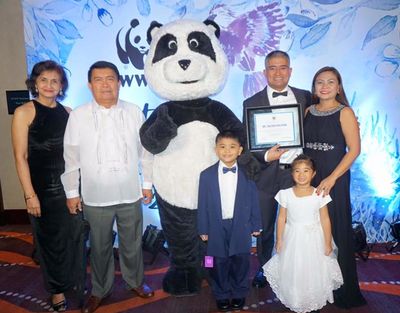 Ingemar Patiño Macarine, nicknamed the Pinoy Aquaman, had quite a year in 2016.

The Filipino attorney not only pioneered five unprecedented channel swims during the year, but received much national recognition for his ocean advocacy efforts.

January 17th: He became the first person to cross from Sumilom Island to Punta Bilar, Surigao City by swimming 10.99 km in 3 hours 37 minutes in a campaign to promote clean seas and Surigao tourism.

January 31st: He became the first person to conquer the Bohol Sea by swimming from Pamilacan Island to Poblacion Baclayon, Bohol covering a distance of 15.15 km in 5 hours 59 minutes in a swim sponsored by LGU Baclayon and IBP Bohol that promoted tourism in Baclayon, Bohol and for clean seas and beaches.

April 24th: He became the first person to swim from Barangay Bulak, Dauin, Province of Negros Oriental to Apo Island across the Tañon Strait covering a distance of 14.7 km in 3 hours 8 minutes.

June 12th: He became the first person to conquer the Cebu Strait by swimming 16.8 km from Cabilao Island, Loon, Province of Bohol to Argao, Province of Cebu in a campaign to promote clean seas and beaches and to celebrate the 118th Philippine Independence Day.

Then the former triathlete turned his attention to the first attempt by a Filipino to cross the English Channel. He left home in August to great fanfare, but the eccentricity of the English Channel got the upper hand and he was unable to give the Channel a shot due to the conditions.

The other WWF Philippine awardees were the Tau Buid Mangyan Tribe from Mindoro, for their role in protecting the critically-endangered tamaraw; and Gerlie Alpajora, who was gunned down in Camarines Sur in August because of her advocacy against illegal fishing practices.

“My gratitude [goes] to all those who helped me in my 15 open water swims here and in the United States. Rest assured I will continue this advocacy to push for cleaner seas and beaches, and promote open water sports,” he said.

But while his swims in the Philippines went according to plan, his attempt in the English Channel was not what he expected. “I enjoyed my 2-month stay in Folkestone. But training in the cold water 6 days a week in Dover and Folkestone was a challenge during my first 3 weeks. Swimming in cold water was so new to me that I had a hard time adjusting. I’m so used to swimming in the tropical waters.”

Despite the new experience in the colder waters off the southern coast of England and the ultimate challenge of weather, he is not about to quit. “I was so disappointed when my English Channel swim was cancelled due to bad weather. I had trained for one year and mentally psyched myself everyday for the ultimate swim, but I went home empty-handed due to circumstances beyond my control.

I will be back September next year for another attempt
.”