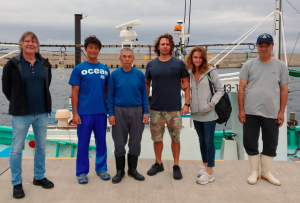 Emre Erdogan of Turkey completed a fast crossing of the Tsugaru Channel.

He swam from Honshu to Hokkaido in northern Japan in 7 hours 36 minutes today. 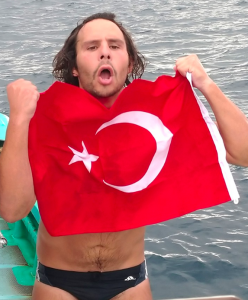 It was his fourth Oceans Seven channel in his emerging marathon swimming career. Today, even with a shoulder injury, he said, “If there’s one thing the sea taught me, it is never to give up.”

He swims as he believes. Even with successes across the Strait of Gibraltar, the English Channel, the Catalina Channel, and the Tsugaru Channel, his previous two attempts at the Molokai Channel in Hawaii did not end in success.

“In Hawaii, I had my dream dashed because of a shark.”

But Tsugaru did not good at the beginning. “When we went to the meeting [with the pilot and crew] before the crossing, there was rain and storming. The weather and the currents were looking very tough, and it was a little scary. Despite all my meditation, I could not get negative thoughts out of my mind.”

But his escort crew took him to the start on Honshu. “The crew asked me why I swim. I said, ‘I brought the flag of my country. This swim is for the sea and nature. Thanks to this swim, I can send my message to a wide audience. I said my last prayer and jumped into the sea. Now the struggle for me had begun.

I was praying non stop during swimming. I was crying, “Oh God, give me strength to my arm, get me out of this water safely. At the end of the first 40 minutes, they said that I would break a record if I could continue swimming like this. My dad was trying to motivate me and watch for dangers.

I had finished 10 kilometers after 2 hours. The captain and the observer were very surprised. They had never seen such speed. But the Tsugaru Channel had other plans. I heard my father’s voice. It was full of pain. As the waves hit my arms, my energy was sapped.

After 5 hours, we had swum 25 km. I would break the record. During my feeding, my crew said, “You will be on land within 1 hour.’ I was so happy. But then everything changed. The war has begun.

I normally swim a kilometer in 13 minutes, but I was only swimming 1 kilometer in a half an hour. Finally, they said that I had 1 kilometer to go, giving me a little relief. But a half an hour later, I realized I had to relax. When I asked how far I had more [to shore], my Dad said, ‘A storm is coming, if you don’t stop, we’ll stay here, hold on.’ He was looking at me with worried eyes and praying.

My chest was hurting. I didn’t know if it was muscle pain or heart pain. Finally, I touched rock [to finish].”