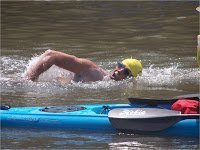 WOWSA Live has one of the world’s most enthusiastic swimmers, Ned Denison, as its guest this coming Wednesday.

Denison will share his insights on the sport of open water swimming and personal experiences from the Pacific Ocean to the Atlantic Ocean – and many places between.

He will explain about preparing for lightening storms around Manhattan Island, becoming hypothermic in Santa Barbara and getting ready for the English Channel.

Denison will describe the Irish roots of the South End Rowing Club, the shortest marathon swim ever in the Island of Jersey, safety rules in the open water, his famously difficult training camp in Cork, Ireland, the open water swimming community in Sandycove Island and other topics of interest to open water swimmers of all ages, abilities and backgrounds.

Photos above show Denison swimming from Valentia Island with Skellig Micheal Island in the background, swimming around Manhattan Island and swimming from Spike Island in Cork Harbour.