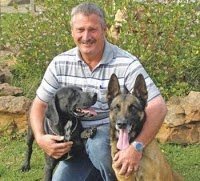 Bob Duenkel of the International Swimming Hall of Fame called for nominations for the 2015 Annual Paragon Awards.

The Awards are presented for outstanding contributions and leadership within the category.

One out-of-the-box nominee for the Aquatic Safety Award could be Inspector Jack Haskins of the South Africa Police Service. The K9 Search and Rescue officer plays a major role in implementing the safety protocols and procedures behind the scenes at the aQuellé Midmar Mile in Pietermatizburg, South Africa.

Inspector Haskins has been with the South African Police Service Dog Unit for a number of years covering a variety of crimes and rescues together with his dogs Udaine, a Belgian Shepherd, and Butch, a black Labrador cross pointer.

Inspector Haskins has been with the South African Police Service Dog Unit, working hand-in-hand with Midmar Mile race director Wayne Riddin at the Midmar Mile. He and his dogs are trusted with maintaining a lookout for individuals who are in distress. He offers a number of pre-race safety tips for the thousands who gather for the annual Midmar Mile:

1. Train well in advance of the event.
2. Do not only train in a swimming pool, but also in the open water.
3. Compete in other open water events in order to get used to other swimmers around you.
4. Train in all weather conditions.
5. Take care at the start entering the water with so many competitors around you.
6. If you experience difficulty in the water, raise your hand to signal help.
7. If you are in serious trouble, attract the attention of other swimmers by keeping your hand in the air.
8. If you are a competitor and see another swimmer in distress, call the nearest lifeguard.
9. After you finish, return to your family and not the nearest pub for an after-swim party.
10. Do not party the night before.
11. Do not swim under the influence of alcohol.

Nominations are accepted until January 4th 2015 and should include data to support the nomination as well as a brief biography on the nominee. Nominations may be sent to: