The Intelligence Of Open Water Swimmers 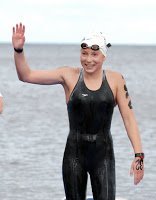 If you look at the open water swimming world, there are a whole lot of smart people. It makes sense: the sport requires diligence and dedication while combining tactics and strategy in a dynamic environment.

It is frankly rare at the Olympic level, the top athletes have their PhD’s. But in Beijing, the open water swimming world had one – Edith van Dijk of the Netherlands. The head of the Channel Swimming and Piloting Federation is Nick Adams, a teacher at Eton College. The current world 25K champion is Alex Meyer, a graduate of Harvard University.

And the current 5K world champion, Eva Fabian (shown above), has the smarts of her fellow intellectuals. Eva will be matriculating to Yale University, one of the top universities in the world, later this year.

Note: Eva and her coach/father will be appearing on Open Water Wednesday this month.