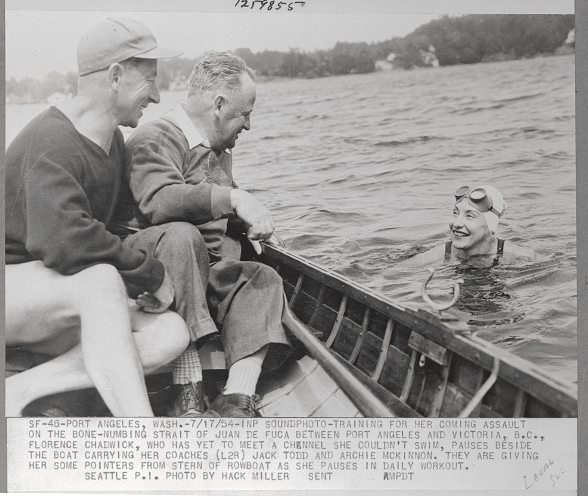 In September 1954, Marilyn Bell DiLascio and Florence Chadwick started their separate solo swims across Lake Ontario from New York to Toronto at nearly the same time.

While Chadwick was offered $10,000 to make the crossing, Bell set off without the expectation of a payoff. 20 hours 59 minutes and 51.5 km later, Bell made the swim.

Archie McKinnon served as my official observer and was later inducted into Canada’s Sports Hall of Fame for his outstanding contribution to Canadian Competitive Swimming. Jack Todd was a well-known philanthropist and distinguished in the sailing community. He volunteered to operate my escort boat on every training swim, my failed attempt, and my successful swim [10 hours 38 minutes on August 23rd 1956].

We swimmers often talk about the fact that there is no “I” in solo and it really is a team sport. In my case, it was my coach Gus Ryder, my pilot Ellice Cavin, and Jack Todd who shared in that successful crossing. In that failed first attempt, the team performed spot on and conditions were better than expected. However, I failed to do what I had trained to do: just swim.

Chadwick was a remarkable female athlete and one of my heroines. After 1954, she continued to be successful and inspire young women like me to be strong, committed to our dreams and, most importantly, disregard the naysayers.