Invasion From Down Under 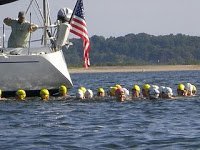 When Surrey Park Swim Club coach Dave Kelsheimer learned that this year’s Fran Schnarr Memorial Swim included a 10K race in addition to shorter races, he started planning for his Australian swimmers to mak a team trip to America.

Surrey Park, a team with over 100 years of history, scheduled a tour to New York and the Cayman Islands their winter school vacation. In New York, 12 Surrey Park swimmers were entered in the 2K, 3K, 5K and 10K events.

Jack Fabian, coach of the Greenwood Memorial Swim Club and world 5K champion Eva Fabian, also brought Max Fabian and Drew Ledwith who went one and two in the 10K.

In the 5K, 14-year-old Kylie Mitchell won the female division followed by Yuria Haruki and Agata Michalak from the Laguardia Aquatic Club. On the boy’s side, Adrien Hoskins and Brandon Jinn went one-two for Greenwood with Matt Darcy of Three Village rounding out the top three.

114 younger swimmers entered the shorter races that were parallel to the shoreline. Their counterparts, the masters swimmers ranging frm 33 to 58 years, raced a separately scored 5K event. Anna Armentrout, Carmen Menocal and Carol Moore went 1-2-3 among the women and Shawn Drum, John Needham and Michael Wright did the same on the men’s side.

Photo by Jo Rambo, courtesy of The Water Blog.