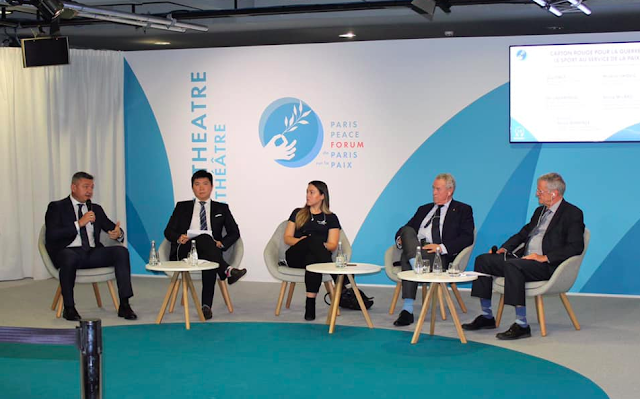 Ion Lazarenco, an Oceans Seven swimmer and the 2018 World Open Water Swimming Man of the Year, is on a mission.

He recently participated in the Paris Peace Forum and the Geneva Peace Week in November.

At the Geneva Peace Week 2019, he and others discussed various topics under the theme of Intergenerational Dialogue on Water and Peace. The exchange showcased how people of all ages, but especially the young, can contribute to peacebuilding. The themes included (1) local and inclusive water management practices for conflict prevention, (2) water in contemporary warfare from a civilians’ perspective, and (3) fostering transboundary water cooperation. The message was that there are emerging humanitarian and diplomatic implications of water as an instrument for peace, a topic very dear to the heart of Lazarenco.

At the Paris Peace Forum, Lazarenco participated in a round table dedicated to promoting peace through sport and explained his approach and mindset. “Through sports, I have made friends all over the world. I emigrated from the Republic of Moldova. Through sports I found work, helped my family, and raised my children. Sports [has] opened a lot of doors. I think that sport has educated me, helped me to have a better life, and a better life path.

It is the seed you plant. You plant it in those children who remained in the Republic of Moldova or in Romania without parents, who either emigrated or died: the children were given a football stadium, a sports field. Through sports, they take away their pain. I used all the tragedies in my life, all the hardships, the heavy childhood, the Soviet Union. For half of my childhood, I lived in the Soviet Union, half after independence. It was an economic crisis. I used all these tragedies to imprison my soul and to motivate myself, to create something better, to put another seed in other needy children so that they would not go through it.”

At the international forum, he asked explained about his Swim of Peace. “Through sports, I learned to swim. But through sports, I decided to travel through the waters of the world. They are connected continentally. They circulate. All currents flow. I decided to learn to swim because water is our continuity. Without water, we cannot survive. I decided to build bridges between nations, especially in conflict zones and between continents. I decided to swim through the waters of the world, to sacrifice my life for the world to wake up and to understand that only through humanity, through love, by giving goodness to one another, by sharing our little, just so we will have soul peace and we will do peace on earth.”

Earlier this year, Lazarenco was nominated for the Nobel Peace Prize for his 15-year involvement in humanitarian aid. “I take them off the streets and enable them to play sports, to go to schools, and to dress. For people with disabilities, I brought carriages, crutches, and other things. When I swam the Strait of Gibraltar, I wanted to bring a message of peace from Europe to Africa. When I saw that I was not heard, I said I would swim from the UK to France. Then, from the north of Ireland, where there is now a small problem, to Scotland. I became obsessed with this message. I have seen how much I draw attention, unfortunately less in Eastern Europe, to us, but more to the west.”

Lazarenco did not only travel to Geneva, but he also visited Latvia, Spain, Romania, Greece, Turkey, France, Germany, Portugal, Switzerland, England, and many more while promoting peace. He explains, “The Swim of Peace was in Lake Geneva where I swam 15 km across from Switzerland to France. Then I visited Turkey to swim across the Bosphorus as a special invitee among 2400 swimmers from 53 countries. What an experience to participate as a speaker and motivator while swimming from one continent to another.

I was also invited to the Counsel of European in Strasbourg for various meetings including with the Secretary General.

I did a 30 km swim in the frozen area conflict on the River Dniester in Moldova with the message of peace and to commemorate the 30-year anniversary of UNICEF’s 30 years of children rights.

Ocean Man Greece Limeni invited me as a special guest to award medals, give speeches, attend press conferences, and participate in television interviews, then I was awarded an award.

I was only recently invited to the Paris Peace Forum for 3 days where I attended as a speaker, along with many chief of states including President Macron of France where over 3000 people attended.

Then it was on to Lisbon, Portugal where I met officials from embassies and the Ministry of Education to discuss implementing a project we call Educate Through Sport. I think this project we can be developed everywhere including in the USA.”