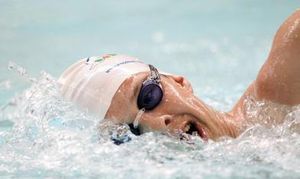 It is a new quadrennial and new open water swimming stars will undoubtedly emerge at the 2013 FINA World Championships in Barcelona, Spain.

Their efforts will be marked for the first time by podium finishes at a world championships. Their hard work and commitment to the sport will be paid off…and more expectations will be heaped upon them as the 2016 Rio Olympic Games gets closer.

Who are these possible new stars?

One candidate swam well recently. At last week’s 10 km Campeonato Nacional de Aguas Abertas in Portugal, Chris Bryan let his swimming do the talking and tipped his cap of what he is capable of. Bryan swam a strong 10 km finishing in 2:02:15, far ahead of Portugal’s Olympian Arseniy Lavrentyev who won the Portuguese national championship race in 2:03:50, and a host of other Great British and Portuguese elite swimmers.

After just missing out at qualifying for the 2012 London Olympic Games, Bryan picked himself back up. We believe he will make a name for himself over the next few years in his renewed quest to achieve his Olympic dream in Rio de Janeiro in 2016.