Iron War On Terra Firm And In The Open Water 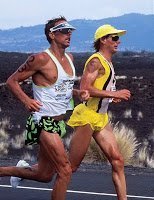 In the new book Iron War, Matt Fitzgerald writes about the battle between famed Ironman triathletes Mark Allen and Dave Scott. In a review by Slowtwitch.com‘s Dan Empfield, he talks about the widely praised 1989 race in Kona and the lives of these two endurance warriors.

“Iron War is the very first time our sport has engaged in Krakauer-style journalism, where full-featured personalities are presented to readers without excuse, or pause, or an author’s self-censorship. Iron War is Fitzgerald’s Krakauer moment…I’ve always been a fan of Dave Scott and Mark Allen. But they’ve always been two dimensional to me. Life-sized cardboard cut-outs. I must tell you I love them both more now, after having read [Iron War]. The book has added that third dimension…”

Triathlete Magazine shares his enthusiasm for the rivalry and the book. “The 1989 Ironman® World Championship is widely considered the most epic race in Ironman history, if not all of endurance sport. In his new book Iron War, Fitzgerald recounts in gripping detail the showdown between Mark Allen and Dave Scott. Iron War delves into the vastly different personalities and psyches of these two iconic athletes and presents an anatomy of mental toughness that both men shared.”

On the other hand, the two great endurance athletes are not happy with the publication. In an open letter to the triathlon community, Dave and Mark write, “…But more importantly, by his refusal to have us be cooperative partners in the book, we had overwhelming concern that our stories, if told to him, would not be recounted with accuracy and, in the end, we did not participate in the project. The result of that decision: Fitzgerald has created an endless string of seemingly personal anecdotes that because of his deceptive writing style leave the reader with the perception that they came directly from our mouths.

Unfortunately, Fitzgerald and VeloPress have reduced our 1989 test of wills on the Big Island to a flawed and sadly shaded depiction of its protagonists. Our hope is that you, as intelligent and discerning athletes, will know and remember our battle in 1989 for its grit, and use that as inspiration to explore and break through your own limits to find greatness in both your racing and in your personal lives. And if you do decide to read Iron War be prepared to wade through fiction, fantasy and fabrication
.”

Now imagine the same intense rivalry among the great open water swimmers of past and current generations. Where the athletes could not see where they are going; where their course was charted and guided by escort pilots; where the battle was not only between swimmers, but also with Mother Nature; where the athletes pushed themselves to the brink of hospitalization as they swam in the darkness; shivering, sore, hungry and hypothermic for much of the race.

These are only a few of the head-to-head rivalries – where sensory deprivation is a given and one’s motivation comes from inside and the arm splash of their competition – that dot the annals of marathon swimming:

The intense rivalry of Mark Allen and Dave Scott going mano-a-mano on the lava fields of Kona has surely been replicated in marathon swimming competitions in oceans, lakes and rivers around the world, but their 1989 race in Kona remains among the greatest in endurance sports history.

Whether these rivalries are on land or in the water, well-written books with recollections of the combatants’ thoughts are wonderful reading and great inspiration.