Is Ben Lecomte Safe Swimming In The Pacific Ocean? 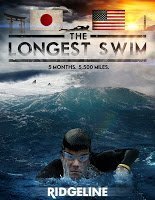 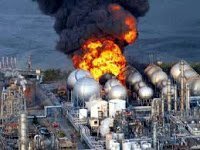 Benoit Lecomte will begin his 5,419-mile stage swim, called The Longest Swim, from Tokyo to San Francisco around May 15th.

Many wonder, “How does a single human actually swim 8,721 kilometers?”

Does he stop? What does he do when he is not sleeping? Is he assisted with fins? Does he wear a wetsuit? When does he eat? How many boats are in his flotilla? What happens in an emergency? Who is on his crew? How big are waves out in the middle of the Pacific Ocean? What about the possibility of rogue waves? Will he hit the Pacific Trash Vortex? What is the water temperature?

In recent press conferences, one question that Ben is asked is, “Based on your course in the nuclear fallout area, are you going to be affected by the radiation in the Pacific Ocean due to the nuclear plant disaster in Fukushima, Japan?

According to many scientists, the nuclear power plant meltdown and subsequent crisis in Fukushima, Japan (see photo above) is threatening the ecosystem of the Pacific Ocean. Others are more optimistic; others think of doomsday scenarios.

Due to the 9.0 magnitude earthquake that occurred on March 11th, a disastrous tsunami with ocean surges up to 13–15 meters (43–49 feet) arrived 50 minutes later and topped the plant’s seawall. From the moment violent shaking of the plant caused damage to the subsequent nuclear meltdown, the threat to the surrounding area was of grave concern to residents and visitors alike.

One year later, fears still abound and threats to the livelihoods and lifestyles of those in Fukushima all the way along Japan’s eastern seaboard continue. Ben’s starting point in Tokyo is about 200 kilometers south of the Fukushima Daiichi Nuclear Power Plant, but there is also a certain amount of nuclear debris that washed out to sea. The issue is whether or not, or how much, will Ben be harmed by the radioactivity along his Pacific Ocean course?

It appears that is risk of getting harmed by radioactivity is reportedly low and of no real concern for Ben due to a variety of reasons. Along the east coast of Japan, water flows from the north in Hokkaido southwards towards Fukushima along the Oyashio Current. From there, the northeast-flowing Kuroshio Current runs across to Hawaii. Where the currents collide, there is a very rich fishing area where some fish contamination is reportedly taking place.

However, the contamination is much less than may be feared. The Marine Biological Laboratory in Woods Hole did a ship-based radiation survey in the Fukushima area. Although the experts will report their findings at a symposium next year, the MEXT data is constantly monitoring radiation at around 40 points in the ocean off Fukushima, the most northerly sampling points being A1, A2 and A3. The locations of these measuring points are here with the latest data here.

Currents around Japan are posted here, but there are innumerable eddies that occur continuously at and below the surface of the ocean, constantly diluting the radioactive debris in the ocean. Day by day, the water-based radiation heading towards northern Hawaii and onwards towards Ben’s goal of the Golden Gate Bridge in San Francisco is constantly diluting and decaying. The amount of radiation added to the Pacific Ocean is about the same as was added by the first Pacific bomb tests. The radiation load from those Pacific tests is still decaying, but are longer-lived isotopes, and the radiation load due to Fukushima will drop below the then-current Pacific test levels in about a year.

While some individuals may find different information and come to different conclusions, it appears that in 2013 there will be more radiation in the Pacific Ocean from atomic bomb tests 40 years ago, than from the recent Fukushima nuclear meltdown last year.

Of course, there are always other issues to deal with in the open ocean. “I know I have to push myself, push my limits. I want others to see that they can take chances and move out of their comfort zone,” said the 44-year-old from southern France, now an American citizen. “What I’m doing is scary. When I swam the Atlantic (3,716 miles over 73 days), I had a shark follow me for five days. It’s not a question of if, but when.” Read more here: http://www.star-telegram.com/2012/03/15/3813643/grand-prairie-man-looks-to-swim.html#storylink=cpy Read more here: http://www.star-telegram.com/2012/03/15/3813643/grand-prairie-man-looks-to-swim.html#storylink=cpy Ben‘s latest video – full of optimism, hope and inspiration – on The Longest Swim is below:

Information above gathered with the assistance of Paul Hardy from Tokyo.