Is It The Recession Or The Open Water? 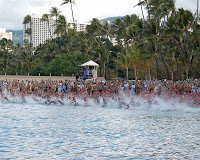 According to Running USA:

467,000..that’s the number of estimated finishers and runners who completed a marathon last year.

10%…that’s the total annual increase of runners finishing a marathon from the previous year.

Sold Out…that’s what happened at most big city marathons in 2009.

The complete press release is below to see a very interesting break down of the 2009 numbers by age, gender, and the fastest medium times by marathon runners.

In 2009, U.S. marathons overcame the gloom and doom of the recession by posting another year of record participation with 467,000 estimated finishers as well as the largest percent increase (nearly 10%) in more than 25 years. Across the country last year from New York City to Seattle, marathons most likely either sold-out or had a record field, and to-date, 2010 looks as promising with sold-out marathon fields at Walt Disney World, Chevron Houston, Honda LA, the upcoming 114th Boston and this October’s Bank of America Chicago.

There are several interconnected reasons for this marathon mania including: 1) a response to the bad economy (e.g., relieve stress, more time to train for some, etc.), 2) training for and running a marathon is something that one can control unlike the stock market or the economy, 3) positive, feel good energy surrounds marathon preparation and race weekend, 4) well-organized, fun events and 5) the challenge of 26.2 miles – a greater sense of accomplishment for many during bad economic times.

The sport of triathlons is expanding in all kinds of directions including divisions that substitute running with power-walking. “Just because you’ve had a knee replacement doesn’t mean you can’t get out there and compete,” said Gary Morgan, a triathlon organizer from Cincinnati.

And so goes open water swimming where athletes do not have to be hypothermia-resistant, hard-core marathoners to enjoy the sport. Neoprene hats, wetsuits and even fins are now accepted in some open water swims as the sport continues to boom.

“But they are in different divisions and are not mixed up with swimmers who compete traditionally,” reminds Kaia Hedlund who is the race director for the Waikiki Roughwater Swim that started in 1972 and added a fin division in 2010.