Is Lucky Meisenheimer Going To Host The Olympic 10K? 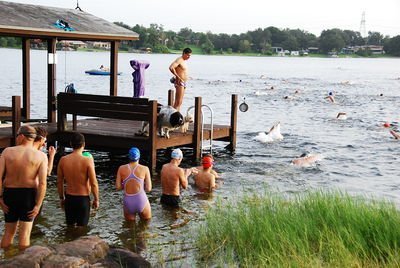 We think of the possibilities.

The Lucky’s Midnight Swim, Aquatica Swim, and his Lucky’s Lake Swims in Lake Cane are renowned in the American open water swimming community, drawing athletes from throughout the United States and around the world.

At the same time, Lucky is making Lane Cane the center of the central Florida open water swimming community, the United States Olympic Committee is planning for the 2024 Olympic Games. Orlando Mayor Buddy Dyer received a letter from the US Olympic Committee asking him if Orlando is ready to handle an official Olympic bid. The citizens are getting fired up about the possibilities.

“This city has the hotels and huge infrastructure already in place to handle it,” said Jim Hollingsworth. “When the Olympics are on everyone tends to get happy and patriotic,” Jennifer Kurz said, “And I think it would be awesome and a great boon for Orlando.”

But logistical and financial realities must be balanced with the excitement of possibly holding the Olympics in Florida. In 2001, Orlando and Tampa tried unsuccessfully to host the 2012 Olympics. It may be a long shot, but if Orlando does get the nod from the US Olympic Committee and then is eventually awarded the 2024 Olympic Games will Lucky become the American counterpart to Britain’s Colin Hill?

With his track record, passion and knowledge of the sport, it would be remiss not to get Lucky involved.