Is Penny Palfrey The Greatest Marathon Swimmer Ever? 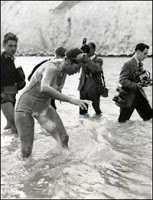 As Penny Palfrey enjoys the second day of her 103-mile (166 km) ultra marathon swim from Cuba to Florida, she is being touted by some of her peers in the marathon swimming world as the world’s greatest marathon swimmer.

Her track record as a solo swimmer is one of the greatest in history and there is no doubt she is the most prolific ultra marathon swimmer and adventurer in contemporary times.

But is her resume of swims unparalleled? Is she the greatest in history? The completion of her Cuba attempt will permanently place her stamp on history, especially in combination with her Cayman Islands swim and inter-island swims in Hawaii.

Who can be considered as the greatest marathon swimmer of the modern era (i.e., roughly defined as the 1960s on and limited to those athletes who still swim)? How is greatness defined? Is it completing unprecedented solo swims, breaking records or winning head-to-head competitions? Is it based on the relative difficulty of the swims?

Was Palfrey’s 68-mile Cayman Islands swim greater than Philip Rush’s 63-mile 3-way English Channel swim? That is as difficult to decide as to what is better: chocolate ice cream or chocolate cake.

But who really are the titans of the sport? The greatest of the modern era? So many heroes and heroines come to mind. How can a discussion leave out these candidates?

Alison Streeter MBE, the Queen of the Channel® with 43 crossings of the English Channel and dozens of other crossings and marathon swims including 3 times across the North Channel.

John Kinsella, two-time Olympic medalist and the dominant professional marathon swimmer of the 1970s, completing and winning nearly 40 races over 20 miles in his career.

Michael Read MBE, 33 English Channel crossings for a total of 120 solo marathon swims over his career while devoting decades of his life helping other swimmers.

Kevin Murphy, 34 English Channel crossings as well as hundreds of other solo marathon swims who has devoted decades of his life encouraging others.

Petar Stoychev, 11 years of dominant rule over the professional marathon swimming circuit as well as a world 25 km champion and holder of the English Channel record.

There are so many more…Vicki Keith, Lewis Pugh, Paul Asmuth, Penny Dean, Tammy van Wisse, Jon Erikson, Susie Maroney and Claudio Plit whose exploits have not been comprehensively described to the growing open water swimming world. As Kevin Murphy has said, “I have so many papers in my office [about marathon swims around the world]. One day, I need to organize and write about these swims.” The treasure trove of information and the expansive breath of experiences that these luminaries of the sport possess are as mind-boggling as their achievements.

The company of the greatest marathon swimmers includes a slew of racers and champions who have done solo swims under some of the most inhospitable conditions imaginable. Who is the best? It depends if you prefer cake or ice cream.