Islamorada around the Alligator Lighthouse Swims 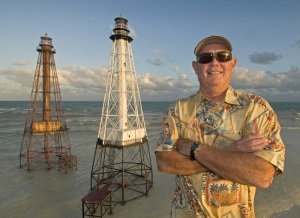 This swim was first accomplished by Larry Herlth, also known as Lighthouse Larry, who is an American artist and open water swimmer from Islamorada, Florida who completed the inaugural 8-mile swim from Islamorada around the Alligator Lighthouse and back in 5 hours 11 minutes.

Herlth attempted the swim as a crusade to raise awareness about Alligator Lighthouse and the five other historic, but deteriorating, beacons in the Florida Keys, including the Sombrero, Molasses, American Shoal, Carysfort and Sand Key lighthouses. He was supported by the Fighting Manatees, a masters swim team in Islamorada. A 5-person relay team that included 6-time Olympic medalist Jon Olsen swam alongside him for most of the swim.