It Changed My Life, Swimming With Yasunari Hirai 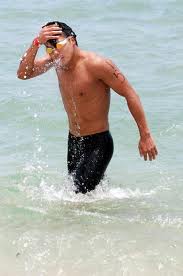 Tomorrow is the 5 km team event at the 2013 FINA World Championships in Barcelona. It is an event that tests the navigational IQ, pacing, drafting, and positioning skills of the world’s fastest open water swimmers.

Several national teams look to perform well and earn a spot on the podium. Teams like Germany, Italy, Brazil, and the USA are among the pre-race favorites, but all the athletes and coaches in Barcelona seem to like the team pursuit concept.

The keys to success with a 3-person, mixed-gender team pursuit are the athletes’ individual and collective navigational IQ and the speed and endurance of the slowest swimmer. Looking over the entry list and the performance of the athletes over the first few days of the competition, Japan has a trio who looks like they can perform well. With Yuto Kobayashi and Yasunari Hirai teaming up with Yumi Kida, the swimmers from the Far East may be able to hang.

Kida placed in 13th in the women’s 10 km – only 6 seconds off of gold medalist Poliana Okimoto. A slender woman with guts to spare, she can easily fit within the slipstream of Kobayashi and Hirai who should be able to pull their female teammate along without problems and with considerable skill.

After graduation in Japan, Hirai recently moved to Perth, Australia and has been training at the University of Western Australia. “The move has changed my life. In Japan, open water swimming is a minor sport. But here in Australia, it is major. I am excited to take part in our first team 5 km. The men’s 10 km race was very rough, especially around the turn buoys and the last lap was extremely fast. But I am now ready to swim with Kobayashi and Kida.”

“I am a little nervous,” admitted Kida. “The team race for Japan will be good. I am excited and will enjoy the race.”