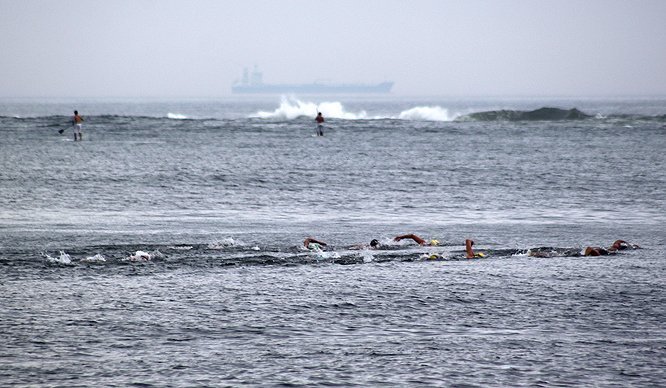 Due to the number of deaths in the swim leg in triathlons, there is a growing interest and need to conduct research on the sport of open water swimming. But there is a significant lack of published and ongoing research outside of studies of hypothermia.

But the issue can be complicated.

But any number of organizations, associations, and governing bodies are facing this complicated issue on what to do.

When researchers look at these issues, there are so many variables involved open water swimming that it presents a significant challenge to any research.

The variables are well-known to triathletes and open water swimming and include everything from water temperature, air temperature, humidity, and the amount of solar radiation to wind (surface chop), distance, time in water, swimwear (wetsuit, short wetsuit, no wetsuit), and degree of individual acclimatization to the elements, which of course can be directly linked to training, body fat index, and aerobic conditioning.

This goes without saying that many of the variables in the actual dynamic conditions of a race often change during an event. It could be an upwelling of cold water or a strong wind of warm air or a stiff breeze that turns tranquil water to a lumpy bumpy mess. It could also include amount of water involuntarily ingested by the athlete or the degree of stress felt by the athlete due to the physicality of swimming among a mass of frenzied competitors. In other words: it’s complicated. Then, even if the interpretation of the various research results are synthesized and translated into a policy approved, there will always be critics.

In order to obtain scientifically valid and relevant data in order to begin to establish practical collars, we would suggest that the research is started within a narrow and non-extreme range (e.g., 64-68ºF). Within that narrow range, perhaps researchers and scientists can then determine the effect of many different factors relatively inexpensively (e.g., the effect of wind, distance, time, or the effect of wearing no wetsuit on athletes of different ages and abilities). Once that data is reviewed and accepted, then perhaps the scientific community can expand upwards and downwards. If the scientific community started its research conservatively, they can then build upon that research and data as time and resources allow. Unfortunately, at this time, most associations and governing bodies are dealing with this issue of risk in the open water with a healthy amount of ignorance, and basing their decisions on a limited amount of information and research. There is a need to look outside the current criteria and test limits that are directly relevant to the millions of people who do triathlons and open water swims in dynamic conditions in open bodies of water. A vast majority of these participants are not as physically fit as teenage and young adult elite swimmers with low body fat who regularly train their bodies rigorously. That is, many participants are working adults with a limited amount of time to train and a relatively small amount of experience in open water acclimatization and training.

So research must eventually include these types of participants in its research so the endurance sports community can understand what happens to the human body when individuals swim in water that is as high as FINA’s upper limit of 31°C (87.8°F) or as low as 10°C (50°F) in order to include some of the more extreme lower temperatures faced by triathletes and open water swimmers.

Naturally, researchers and administrators want cut-and-dry numbers and facts. But the variances in human physiological responses run counter to the desire for specific numbers and rules. But like a human body facing the common cold or cancer, individuals react vastly different in the horizontal position under extreme water and air temperatures and conditions. When these variances in conditions and human responses are sufficiently addressed in research, then the governing bodies will have a much better body of information to then make decisions and memorialized with rules.