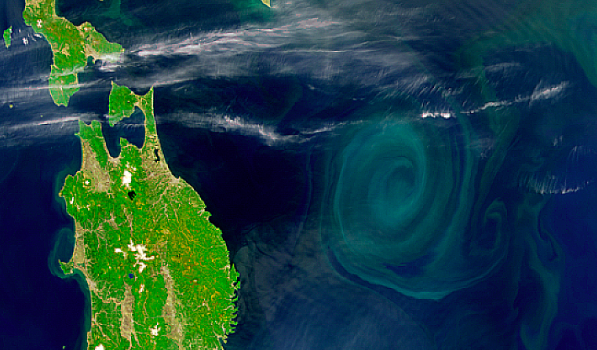 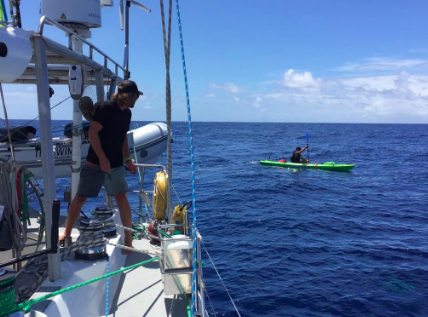 Swimmers trying to cross the Tsugaru Channel between Honshu and Hokkaido in northern Japan [see image on left] frequently encounter eddies, swirling circling current of ocean water. These eddies either serve to delay or – at worse – lead to a channel crossing being stopped. Winds, the prevailing Tsugaru Current moving from west to east from the Sea of Japan to the Pacific Ocean, and the topography of the Japanese land mass on either side of the Tsugaru Channel lead to the creation of these currents.

Now imagine a much stronger and larger eddy in the middle of the Pacific Ocean. This is what Ben Lecomte is currently facing nearly 500 nautical miles off the eastern shores of Japan at the edges of the Kuroshio Current.

The Kuroshio is a warm-water current (with an average temperature of 24°C) that is about 100 km wide that produces frequent small to meso-scale eddies.

Those eddies can cause Lecomte and his team considerable problems, but yesterday was a good day.

Paul Lecomte explains, “We finally got back to the starting point this morning. The sea was very calm and we were able to do a full good session of swimming paced by the kayaker. We saw our usual whales – big ones – but we are crossing an area with a pretty high concentration of trash.”

But the Lecomte’s currently find themselves near the edges of the Kuroshio Current, a position that can present major navigational and logistical issues. In this area, it can take several hours for the escort boat to return to the specific point of exit the day before due to the oncoming current and winds. But if the team gets out of the current, then forward progress towards San Francisco becomes much more difficult. And if they get caught in eddies, then progress by the swimmer and boat becomes increasingly difficult.

Lecomte is being naturally pushed northwards due to the winds and currents so heading south is troublesome. On the other hand, going along a more northernly route may lead to significant drops in water temperature.