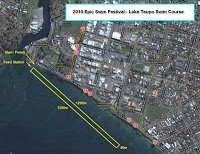 The inaugural Epic Swim Festival in New Zealand will kick-off its first year in the majestic Lake Taupo, the largest lake in New Zealand, in January 2010.

Additionally, as the Festival looks toward the future, it will include recreational swims of varying distances 100-300 meters for children between the ages of 5-12 and a 2K for 12-16 year old swimmers.

It will be another one of New Zealand’s great open water swimming events, capitalizing on the country’s natural resources.