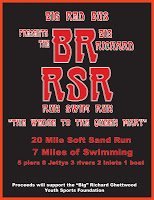 Marathon runners describe the Badwater Ultramarathon as the world’s toughest foot race. Triathletes talk reverently about the Ironman Hawaii. Marathon swimmers put themselves on the map with a crossing of the English Channel.

Badwater, Ironman, English Channel: they are all hard and can beat down even the best-trained athlete down to size.

And so can the Big Richard.

Ultra-marathoners, triathletes, and channel swimmers may not know about the endurance test along the Southern California coast, the world’s longest beach run + ocean swim is one tough amigo.

This 20-mile (32 km) soft sand run + 7-mile (11.2 km) rough water ocean swim is one hard-core biathlon. Run and swim and run and swim, and do it all over again is taxing both mentally and physically. Running in the soft sand is relentlessly difficult as the sun beats down on the shoulders and the thighs burn while trudging through the sand. Between the lactic acid build-up and perspiration, there is nothing easy. But once you thrown in multiple ocean legs through surf and currents, the perspiration turns to shivering as the limbs freeze up and get stiff in the cold upwellings during the swim legs in the Pacific Ocean.

The brutal coastal biathlon is fashioned after the Mega and is organized by Long Beach waterman Matty Mitchell. It starts at the surf-pounding Wedge in Newport Beach and finishes in Long Beach.

Between Newport Beach and Long Beach, the participants in the Big Richard must tackle 20 miles (32 km) total of soft sand running interspersed with a total of 7 miles (11.2 km) of rough water ocean swimming through massive surf breaks around 5 piers, 8 rock jetties, 3 rivers and 2 inlets. Just pure guts and lots of stamina as the athletes trudge through surf and sand along the coasts of Newport Beach, Huntington Beach, Bolsa Chica, Sunset Beach, Seal Beach, and Long Beach.

Named after the legendary Coach Big Richard Ghettwood, the athletes take only their swimsuit, cap and goggles. No shoes, no fins, no escorts, no towels, no wetsuits, no mercy.

In the first year, three watermen Matty Mitchell, Jon McMullen, and Peter Joseph took 7 hours 56 minutes to complete the full biathlon. And they are back training as the Big Richard Year II begins on September 17th at the crack of dawn.