It’s Miller Time…Somewhere In The World

It’s summer somewhere around the world. And if there is an elite marathon competition, it is usually the case that Dennis Miller of Fiji is there.

Dennis is the Liaison of the FINA Technical Open Water Swimming Committee, a FINA Bureau member and the Executive Director of the Oceania National Olympic Committees based out of Suva, Fiji.

“We are heading into a busy year,” commented Dennis in a typical understatement. In 2012, he will oversee three major international competitions: the 2012 Olympic Games Qualifying events in Setubal, Portugal, the 2012 London Olympics Marathon Swimming events, and the 2012 FINA World Junior Open Water Swimming Championships in Welland, Canada.

But before he reached the pinnacle of the open water swimming world, Dennis put in his time organizing, promoting, coaching and managing aquatic athletes for decades quietly and professionally.

Even looking further out on his calendar, Dennis is piling up the air miles like no other open water swimming representative. He will be responsible for the open water swimming events at the 2013 FINA World Swimming Championships in Barcelona, all of the FINA Marathon Swimming World Cup race and FINA Open Water Swimming Grand Prix races in Argentina, Canada, Serbia, Macedonia, Portugal, Italy, Brazil, Hong Kong and China. 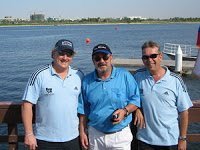 But it was partly his fault.

Together with FINA Technical Open Water Swimming Committee colleagues, Sid Cassidy and Christopher Guesdon, Dennis helped literally mapped out the Olympic 10K Marathon Swim concept on a napkin in a restaurant over 10 tens ago. That napkin and that revolutionary plan eventually led to the sport of open water swimming being added to the 2008, 2012 and 2016 Olympics.