It’s Showtime With Ned Denison And The Torture Swim 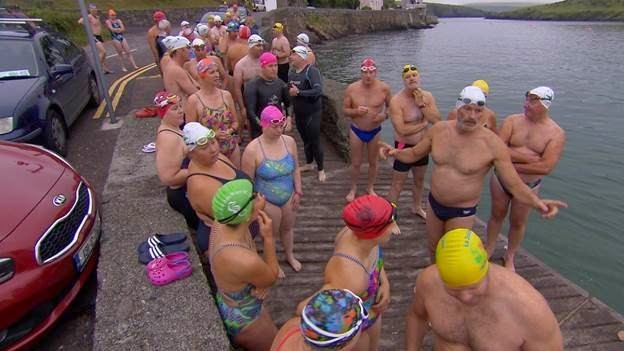 “Marathon swimming is one of the most dangerous and unheralded sports in the world,” opens CBS 60 Minutes Sports host Jeff Glor. “Among the obstacles…physical agony beyond comprehension.”

This is what attracted America’s 60 Minutes to Cork, Ireland to capture the world’s most grueling swim training camp run by the renowned Ned Denison.

The televised segment can be seen here (password: showtime) at 36 minutes into the program as the third segment.

As the program clearly demonstrates, producer Alan Goldberg, Glor, and the American television film crew were more than impressed and intrigued with the Cork Distance Week and its ambiance, goals and participants. “Calling Ned’s grueling swimming sessions a “camp” does a disservice to a word usually ascribed to fun-filled activities. The swim camp means pain and suffering for those hoping to conquer the English Channel, the Mount Everest of open water swimming.”

CBS’ Jeff Glor went to Ireland to see Denison torturing his campers in their preparations for the event of their lives. His report – called Torture Swim – will be broadcast on the next edition of 60 MINUTES SPORTS, premiering October 7th at 10 pm on Showtime Networks, a wholly-owned subsidiary of CBS Corporation.

“Seriously motivated swimmers come to Denison for nine days of swimming in cold water, under varying and punishing conditions meant to duplicate what they may encounter in the Channel and other big swims. They will wind up swimming for nearly 40 hours and go over 60 miles. But the first thing, maybe the only thing they learn, is it’s more about the attitude than the stroke.”

Denison, a former All-American water polo goalie turned channel swimmer has a particularly unique perspective on his role at the head camper. “I do not understand swimming. I’ve never taken a swimming class. I don’t coach swimming technique at all. I am a motivator. I’m a seriously dangerous motivator.”

CBS was thoroughly surprised by Denison’s form of motivation. “Denison motivates by raising his voice and his swimmers’ expectation of their own abilities. He goes out of his way to find daunting water conditions that may steel them for the rough seas, stinging jellyfish and the cold water they’ll experience in a Channel swim. He takes them out and deliberately disorients them in the ocean, takes routes with sudden drops in water temperature, brings them inland to powerful rapids with cold water and rocks. He’s been known to weave among his swimmers in a motor boat to create a menacing wake, confronting them with conditions similar to the ship traffic they can face in the Channel.”

46 of the campers have completed the English Channel swim. “Something in the human psyche that loves this test. They seek it out. They want it. They want the challenge,” Denison told Glor. “It’s epic. It’s mythical. It’s ugly. It’s tough.”

“I grew up watching 60 minutes [in America] so I was sure that the production quality would be excellent, but wow!” remarked Denison. “Living in Cork, I forget what amazing places we have to swim. For the mass U.S. audience, hopefully The Torture Swim is a great introduction to the sport. It captured the range of swimmers: 20s to 60s, thin to powerful, slower to faster and novice to elite.

We get swimmers from all over the world: motivated, skilled and well-coached. The Cork Distance Week simply gives them the opportunity to focus for 9 solid days, in great waters surrounded by like-minded swimmers
.”