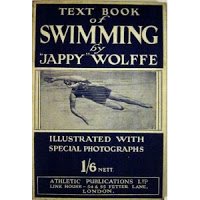 Jabez Jappy Wolffe, one of the best swimmers of the first decade of the 20th century, attempted 21 unsuccessful crossings of the English Channel between 1906 and 1913.

The British swimmer’s successful marathon swims included the 24-mile swim from Brighton to Worthing and back, 34 miles from Margaret to Herne Bay and back (9 hours 39 minutes), Southsea to Ryde and back, Eddystone Lighthouse to Plymouth Pier, Dover to Ramsgate.

He was also the coach of three successful English Channel swimmers.

Wolffe used mostly breaststroke occasionally incorporating the overarm side stroke. He failed once by only yards and by less than a mile on three other occasions. Many times it was due to pilot error and starting off on the wrong tide.

Unsuccessful as a channel swimmer, he can claim credit to being one of the first coaches of English Channel swimmers. His successes included the best women of his era including Hilda Sharp (1928), Margaret Duncan (1930) and Sunny Lowry (1933). He also was the trainer of Gertrude Ederle‘s first English Channel swim in 1925. He disqualified Ederle when he asked another swimmer, Ishak Helmy, recover her from the water.

Not only was he the holder for 10 marathon swimming records, he was also an accomplished walker, cyclist and rower, once covering five and one-quarter miles of each specialty in a total time of 3 hours 40 minuets, an early triathlon.