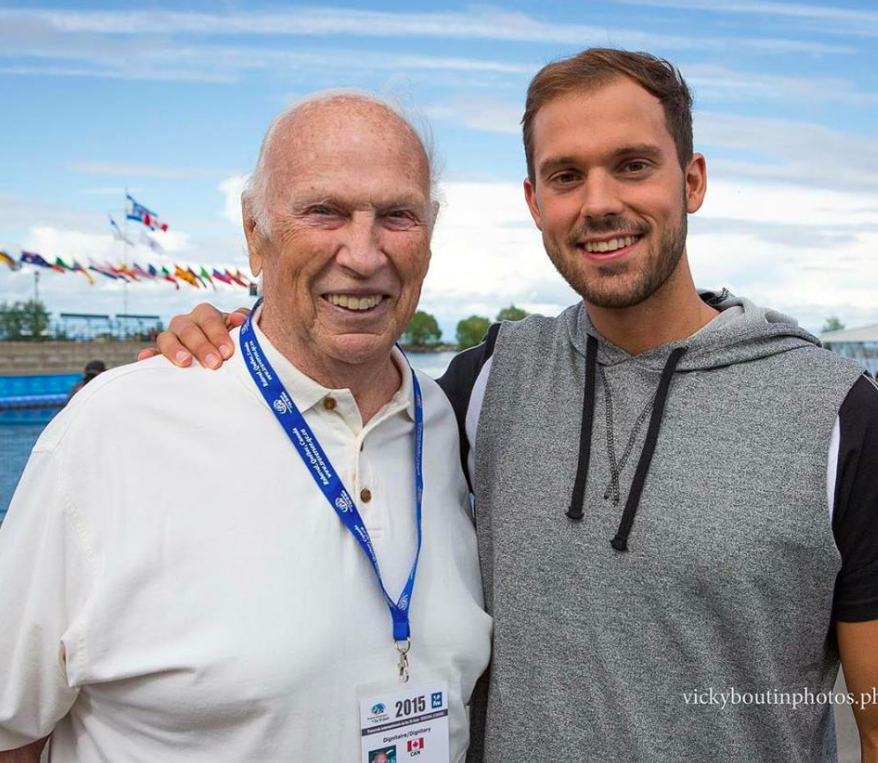 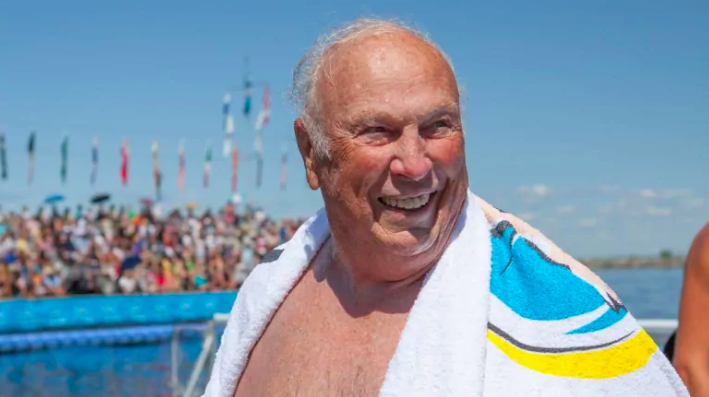 Jacques Amyot passed away at the age of 93 on September 7th in Quebec City, Canada where the famed marathon swimmer was born.

“How sad it is to lose such a great man. For those who do not know him, Jacques Amyot was the first man to cross Lac St-Jean. Imagine [what] it takes to be the first to try a test as extreme as swimming across Lac St-Jean. He is also the first person from Quebec to cross the English Channel [in 1956] and was the author of a number of open water swimming exploits,” reported Xavier Desharnais, shown above with the International Marathon Swimming Hall of Fame Honor Swimmer.

His exploit inspired the annual Traversée internationale du lac St-Jean, the most prestigious professional marathon swim in the world.

“I’ll always remember our first meeting. I came to the lake to do the marathon swim, but unfortunately, my coach had not registered me in time. I still made the trip with the swimmers and I had to come back with the dignitaries. Among them, the legend, the true Jacques Amyot himself. Despite his status, it didn’t take any time before he came to talk to me, some a little guy from Sherbrooke who started [a career in] open water. We walked along the course and talked about the time he got lost himself while trying to cross the lake and his passion for skiing.

No doubt, this gentleman left a huge mark in my mind. How happy it was to be with him year after year. But especially what honor it was to walk (swimming) in its footsteps (its wave) 60 years after its feat out of common. I feel privileged to see my name by his side in the short list of Canadian champions of the Traversée internationale du lac St-Jean
.”*

Amyot was the first person to swim across lac St-Jean in July 1955 when he overcame strong winds and thunderstorms over the inaugural 26 km crossing between Veauvert Beach at the mouth of the Péribonka River and the city of Roberval in 11 hours 48 minutes. His unprecedented achievement helped establish the Traversée internationale du lac St-Jean as one of the world’s best organized and most prestigious professional marathon swimming races.

He was always sharing, mentoring and inspiring swimmers even into his 90’s.

Every year – except this year – Amyot would come to the Traversée. Kim Privé, chairperson of the Traversée said, “Every year he made a point of honour of attending the fundraising evening in May and during the week of the competition in July. He took great pleasure being there at the finish line.”