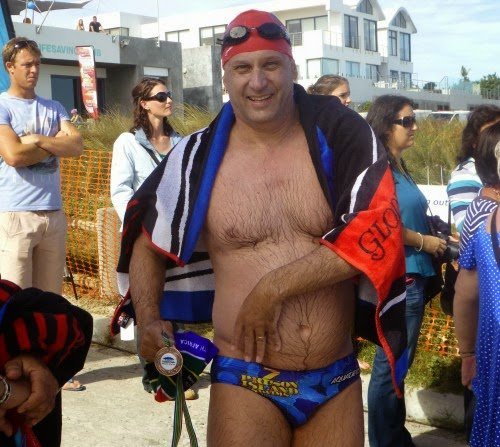 French swimmer Jacques Tuset has escaped from more prisons than even the most infamous criminals in history.

But he escapes – swims – with the full knowledge of the local authorities.

With 7 swims completed by Tuset, the 10 Prison Island Swims scattered around the world include the following locations:

1. Le Château d’If (France) is a fortress and former prison) located on the island of If in the Mediterranean Sea in southeastern France
2. Fort Boyard (France) is an oval-shaped fort and military prison located between the Île-d’Aix and the Île d’Oléron in the Pertuis d’Antioche on the west coast of France
3. Devil’s Island (French Guiana) is 14 km (9 miles) off the coast of French Guiana in South America and a well-known location of the French penal system and a leper colony
4. Île de Gorée (Senegal) is known as the location of the House of Slaves located off the coast of Senegal
5. Robben Island (South Africa) is the former isolated prison home of Nelson Mandella and other South Africans 7.5 kilometers off the coast of Cape Town
6. Alcatraz Island (U.S.A.) is the former isolated prison home of Al Capone and other celebrated American criminals 1.5 miles from Aquatic Park in San Francisco Bay in California, U.S.A.
7. Spike Island (Ireland: Inis Píc): is the former isolated prison home of infamous immates 2 kilometers off the coast in Cobh Harbour, Ireland
8. Rottnest Island (Australia): the finish of a 19.7 km Rottnest Channel Swim west of Perth, Western Australia, was used as an Aboriginal prison between 1838 and 1931 for men and boys
9. Sainte-Marguerite (France): Mediterranean opposite Cannes (1 km) which was used as a military prison and where the famous Man in the iron mask was held captive
10. Île du Levant (France): a former penitentiary on the Mediterranean French island off the coast of the Riviera, near Toulon

These sites are now 21st century sites better known in the swimming community for challenging open water swims with tricky currents and surrounding marine life rather than its penal history. Convicts of the past have given way to people like Tuset and other contemporary open water swimmers and wetsuit-clad triathletes.