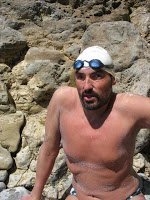 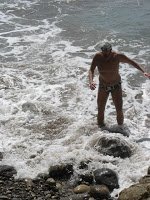 Jaime Caballero became the first person to join the Triple Crown of Open Water Swimming in 2012 with his 9 hour 31 minute crossing of the Catalina Channel today.

“I feel really proud,” said Caballero after his fast swim in 53°F (11°C) water. “But at the same time I felt really tired. The winds made the waves terribly choppy. I am really proud of the Triple Crown accomplishment because I love swimming.”

He took it out fast as he reached the halfway point around the 3-hour mark, but the waves slowed him down. However, the cold was not about to defeat him. “I was able to deal with the cold water because of my hard training in northern Spain near San Sebastian.” But he had a huge motivation to get this channel under his cap.

“Our reason for doing this is for raising money for Augie’s Quest and to find cures for ALS (Asociación Siempre Adelante). Many of us have lost family members to this disease. We are very enthusiastic with what we are doing for ALS treatments.”

Since 2011, the 49th person in history to complete the Triple Crown of Open Water Swimming has raised nearly US$150,000. Today’s swim raised US$100,000 alone as one of the largest and most successful charity swims in history.

His smile lit up once he stepped on the California coastline. “I’m very happy how it turned out.”