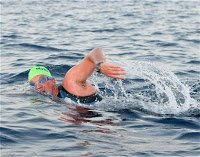 Jamie Patrick has swum all of his life. From California to Hawaii, he has always hung around pools, lakes, oceans and bays. Doing everything from body surfing to massively long sets in the pool, the DNA of the San Francisco-bred athlete is deeply embedded in the water world, salt or fresh, smooth or rough.

Like millions of people around the world, he loves swimming. He does it for himself and he does it with friends and family.

But he has taken his love a step further in his 40s.

Recently, he has generously opened his home up to the marathon swimming community and supported a number of swimmers attempting everything from their first open water swim of a mile to ultra-marathon challenges in the sea.

He also started the Lake Tahoe Swimming Society that supports and organizes a number of solo swims (traditional and wetsuit) in Lake Tahoe.

Positive and passionate could be his middle names.

But he has taken his lumps among those in marathon swimming world over the last few years. His sin? Swimming in Lake Tahoe with a wetsuit in 2010 and calling his 42-mile, 25-hour effort a marathon swim.

That definition – especially when it was picked up by the mainstream media in the United States – opened him to stinging barbs among some in the marathon swimming world. From his native California to New York, disparaging remarks online and onshore have followed him for years.

The reason: traditionalists in the marathon swimming world are justifiably protective of their turf. What they do – swimming in cold water unprotected against the cold, sharks and jellyfish for extreme distances – is extraordinarily difficult. It is an aquatic discipline not for everyone. It requires sacrifice, commitment, acclimatization, time and money. It requires mental fortitude and physical tools that requires months and years of continuous training.

Traditionalists define marathon swims as non-stop swims over 10 km (or 25 km or 20 miles depending on the individual) that do not incorporate any swimwear, swim caps or equipment that aid in heat retention, buoyancy or speed. Some traditionalists also limit swimwear in marathon swims to porous swimwear that go no lower than the groin or past the shoulders. These definitions (depending on the organization or individual) exclude the use of neoprene caps, wetsuits, stinger suits, technical suits that go below the knee or past the shoulder, shark cages, electronic shark deterrents, double swim caps, jellyfish protection units, swimmer shades and swim streamers.

From their perspective, Patrick crossed the line.

In the open water swimming world, the differential between non-wetsuit and wetsuit is quite clear. For many marathon swimmers, nothing is as sacrilegious as wearing a wetsuit. “It is similar to riding a moped in the Tour de France,” summed up many. But what is as important is the nomenclature used in the sport. Many marathon swimmers want the mainstream media and online social networks to limit their definitions of marathon swimmers to those individuals who wear swimsuits made of synthetic materials other than polychloroprene (better known as neoprene) and other heat-retaining materials. They must describe marathon swimmers to those whose equipment only includes porous swimsuits (of various configurations depending on the organization or individual), ear plugs, skin lubricants (including lanolin and petroleum jelly), escort boats with GPS, kayaks and paddle boards.

But for a good natured individual like Patrick who has always supported other swimmers of all ages, abilities and backgrounds, the criticism hurt him more than jellyfish stings.

Here follows is Patrick’s response to the feedback: I write this out of my love for Open Water Swimming….