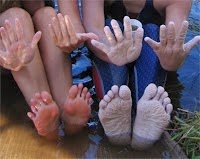 China’s Zhang Jian is the only man who has swum close to this distance and time in flat-water conditions* with his 76.5-mile (123 km) crossing of Bohai Bay in China in 2000 in 50 hours 22 minutes.

Besides the 60-mile (96.5 km) solo swims that were completed by Abdul Latif Abou Heif and Ted Erikson back in 1963 across Lake Michigan, Patrick will also surpass two long lake swims that Yuko Matsuzaki did back in 2007 and 2008.

Matsuzaki completed two long lake swims in Lake Cane, Florida with a 82 km swim in 29 hours 55 minutes and her longest and latest non-stop swim of 83 km completed in 33 hours 24 minutes.

Matsuzaki‘s hands and feet were swollen and wrinkled as one evidence of her time in the water (shown above). Her swim benefited the Central Orlando YMCA Swimming Programs at the YMCA Aquatic Center and Downtown YMCA.

. * Other men have exceeded 50 hours in oceans or rivers (refer to the individuals in the 24-hour Club here).