Jamie Patrick To Swim Towards The Windy City 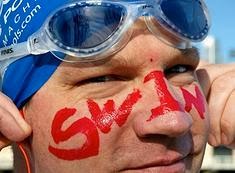 His goal will be the city of Chicago from far north in Lake Michigan.

Chicago is recognized as the Windy City for a variety of reasons, but one is that the third largest city in America sits on the shores of Lake Michigan where the wind is occasionally called “The Hawk“.

As Eric Anderson (shown above) is a hydrodynamicist with the National Oceanic & Atmospheric Administration who studies the physical nature of Great Lakes waters and how they respond to natural forces. The brilliant physical scientist is the leading expert at predicting currents, temperature, water levels and waves in the Great Lakes.

Dr. Anderson provides a plethora of information, data and knowledge in preparation and planning for Patrick’s Great Lake Swim.

He explains what Patrick might face. “The winds can be quite variable over the lakes, though August [when Patrick will attempt his swim] is typically a calmer month with lower wind speeds and waves than the rest of the year. Weather systems in the Great Lakes tend to come roughly every 6 days – some systems show frequency near ~3 days too, so you could conceivably get a stretch of calm conditions for ~3 days, but to forecast when that might occur for this summer is beyond our ability.”

Like other bodies of water that Patrick is familiar with in his native California and Hawaii where he went to university, Dr. Anderson provided a fundamental observation. “The other general rule to consider is the trend of calmer winds in the morning with increasing wind speeds by early afternoon due to the diurnal temperature fluctuations. Weather systems tend to move from the west in the Great Lakes. Some southwest or south up through Chicago will occur as well, so stronger wind events will come from the land and blow offshore in general. Depending on the force and duration, this can cause an upwelling of cold water on the Wisconsin shoreline of Lake Michigan.”